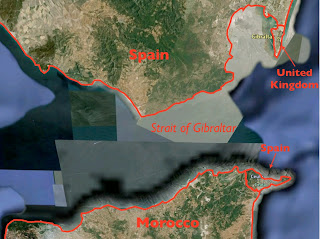 Maritime chokepoints, where ships must pass through narrow passageways, are sites of geopolitical advantage that have often been contested. Sea-based empires, especially Portugal in the 1500s and Britain in the 1800s, seized and garrisoned towns and fortresses at the entrance to marine chokepoints scattered over vast distances. Today, remnants of earlier imperial projects are evident on the maps of several such passageways. The southern bank of the Strait of Hormuz, for example, remains an exclave of Oman, once a formidable naval power, while Singapore, established as the “Gibraltar of the East” at the entrance to the Strait of Malacca, is the world’s premier city-state. 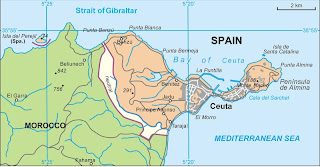 The Strait of Gibraltar itself, joining the Mediterranean Sea and the Atlantic Ocean, is arguably the world’s foremost maritime chokepoint. It certainly is the most geopolitically contested. The strait itself is essentially controlled by Spain to the north and Morocco to the south, as one would expect. But its Mediterranean gateway, marked by two promontories once deemed the Pillars of Hercules,* falls under a different sovereign regime. The “Spanish” side is controlled by the U.K., whereas the “Moroccan” side is controlled by Spain. Neither Spain nor Morocco accepts these foreign enclaves. Spain wants to retain Ceuta and reclaim Gibraltar, Morocco seeks to control Ceuta, and Britain is determined to keep Gibraltar. 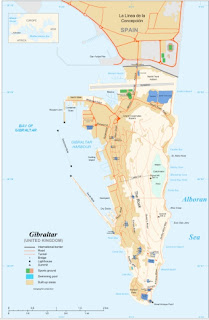 Spain and Britain gained these possessions during their naval heydays. Ceuta was seized first by Portugal in 1415, an event that some say gave birth to the Portuguese Empire. That empire passed in its entirely to the Spanish crown after a disastrous Portuguese invasion of Morocco in 1580; Portugal regained its independence in 1640, but Spain kept Ceuta. Gibraltar fell to an English-Dutch naval campaign in 1704, during the War of Spanish Succession; Spain formally ceded sovereignty to Britain in the Treaty of Utrech in 1713. Spain has periodically sought to regain Gibraltar, just as Morocco has tried on occasion to redeem Ceuta, but neither country has had any success.

According to the Spanish government, Gibraltar is a colonized portion of Spanish territory — an unconscionable geopolitical anachronism. Spanish pressure helps keep the peninsula on the United Nation’s list of Non-Self-Governing Territories, regarded as colonial remnants. Britain responds that people of Gibraltar actually enjoy democratic self-governance through their own parliament, as well as British citizenship. In the 1990s, Britain and Spain hammered out a proposal for joint sovereignty, but the Gibraltarians rejected it overwhelmingly in a 2002 referendum. The Spanish government maintains that their wishes are of no account, as the dispute is between the sovereign powers of Britain and Spain. But in 2006, Spain agreed to talks with Britain and with the leadership of Gibraltar itself, aimed at facilitating trans-border linkages. Progress has not been easy. In August 2010, the mayor of the adjoining Spanish town of La Linea announced plans for new tolls on traffic between the peninsula and the mainland, citing the need to make up for revenues lost in Spain’s budgetary crisis.

The dispute between Spain and Morocco over Ceuta and other Spanish possessions in the region is much more intense. In early 2010, Morocco called for renewed dialogue on Spain’s cross-straits holdings; Madrid responded by reaffirming its sovereignty over the contested lands, which include not just Ceuta but also the exclave of Melilla and a number of near-shore islands. Morocco subsequently charged Spanish authorities with mistreating Moroccan citizens in and around the territories, heightening the conflict. In August 2010, massive Moroccan protests temporarily blocked overland transit into the two Spanish exclaves, threatening their economies.

It may seem hypocritical for Spain to demand the return of Gibraltar while consistently rebuffing similar Moroccan claims in North Africa. Its government insists, however, that the two situations are not the same. Ceuta and Melilla, it argues, are integral parts of Spain, not colonial holdings. Their residents not only possess Spanish citizenship, but vote in Spanish elections, pay Spanish taxes (albeit at a reduced rate), and have all other rights and responsibilities of membership in the national community, as well as the E.U. The position of Gibraltar, the Spanish government maintains, is colonial. As a British Overseas Territory, the peninsula is under British sovereignty yet is not part of the United Kingdom. Gibraltar even has its own currency, the Gibraltar Pound, which is not legal tender in the United Kingdom. The dispute is further complicated by the fact that Spain never formally ceded the isthmus, which remains under British-Gibraltarian control.

The territorial anomalies in and around the Strait of Gibraltar have a number of interesting cultural features as well as potentially serious geopolitical implications, as will be explored in subsequent Geocurrents this week.

* Although the northern “pillar” is clearly Gibraltar, debates persist on the identity of its southern counterpart. Some scholar favor Monte Hacho on the peninsula of Ceuta; others Jebel Musa, located a few miles away in Morocco.