In recent elections, Brazil has exhibited a distinct north/south electoral divide, with the north supporting leftwing candidates and the south supporting rightwing candidates. Strictly speaking, this is a more a northeast vs. south & west-center split, as the sparsely populated northwest is itself electorally divided, as is the large center-east state of Minas Gerais (“MG” on the map below). This political division correlates closely with income and human development. As a general rule, the poorer states of Brazil’s northeast support candidates on the left while the richer states of the south support candidates on the right. This pattern can be seen on maps comparing the 2022 election results with those showing per capita GDP by state and the Human Development Index (HDI) by state. Some exceptions exist, such as the relatively poor but right-voting states of Acre (“AC”) and Amapá (“AP”), and relatively wealthy but left-voting Minas Gerais, but the general pattern is clear. 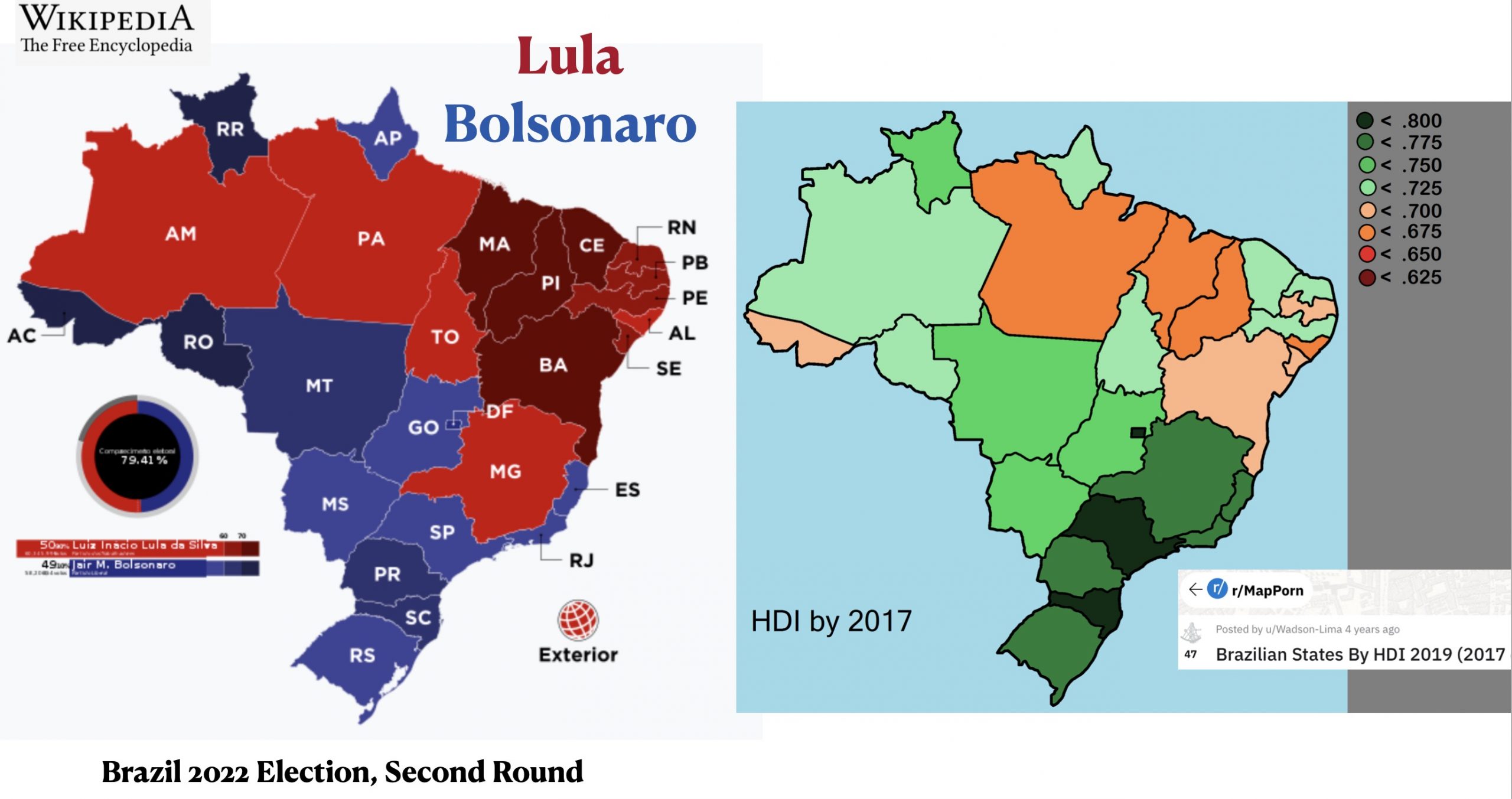 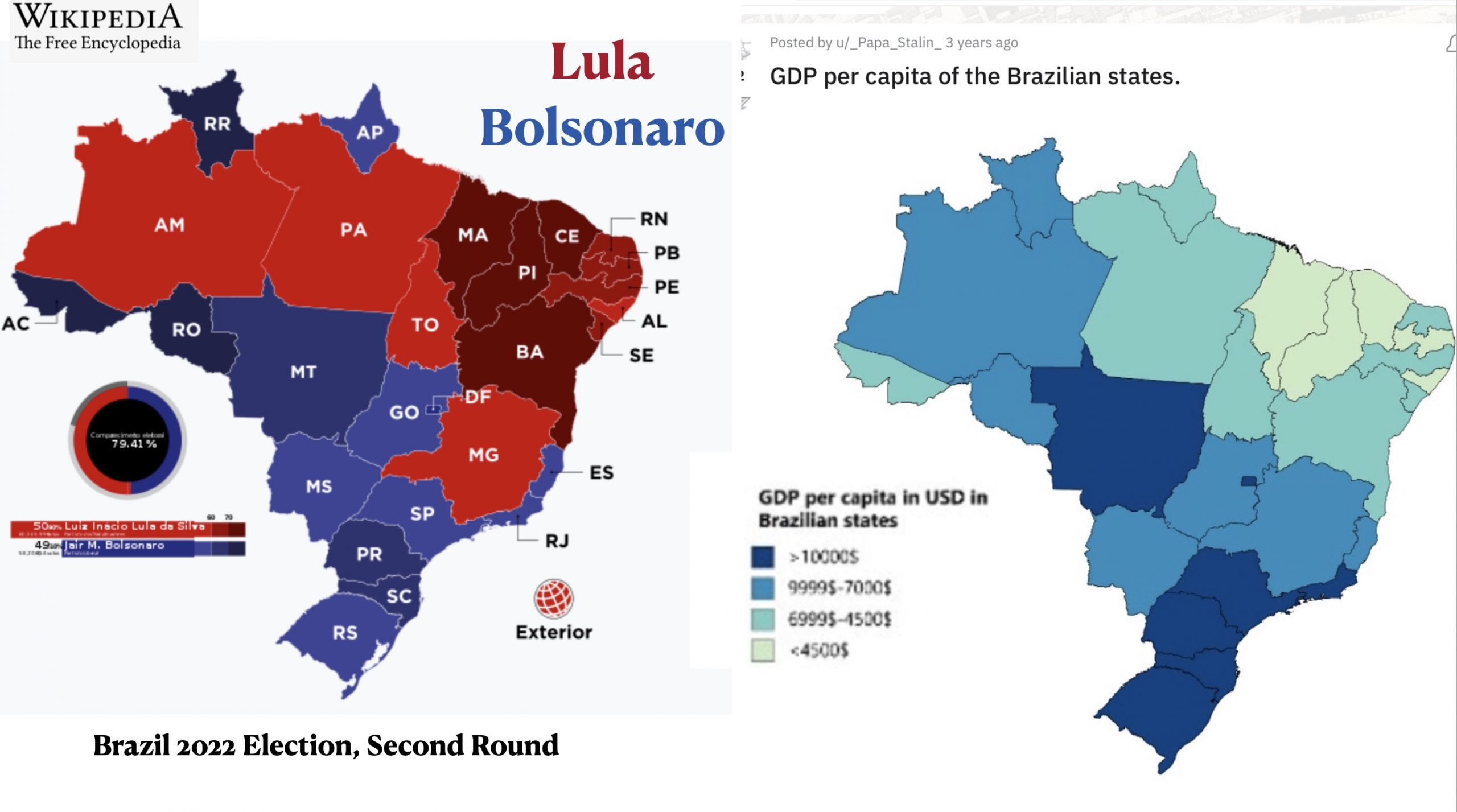 This correlation might seem predictable, but it no longer holds in the United States or over much or Europe, where wealthier regions now tend to vote for the left. Brazil’s north/south divide, moreover, has emerged only in recent elections. In 1989, for example, the leftwing candidate Lula da Silva triumphed in the relatively wealthy southern states of Rio Grande do Sul and Rio de Janeiro, as well as in the prosperous Federal District (Brasilia), while losing most of the impoverished northeast. When Lula finally won the presidency in 2002, he took every state except northeastern Alagoas. Lula’s successful anti-poverty programs subsequently solidified his power across the northeast (with the exception of coastal Alagoas)  In his 2006 reelection, the current latitudinal divide appeared on the Brazilian electoral map. In that contest, the centrist candidate Geraldo Alckmin took most of the south and the center-west. Intriguingly, Alckmin teamed up with Lula to run as his vice-presidential candidate in 2022. 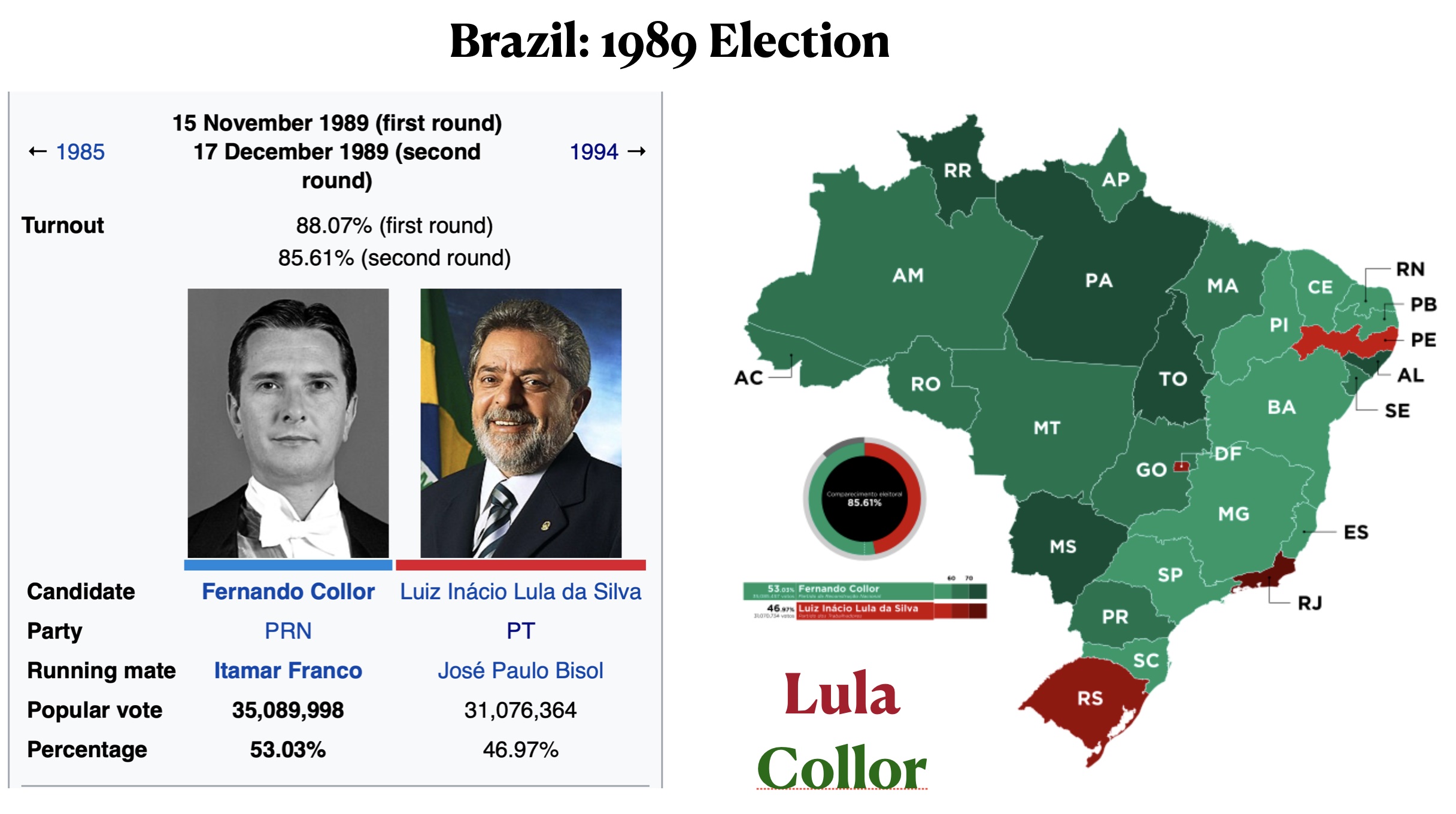 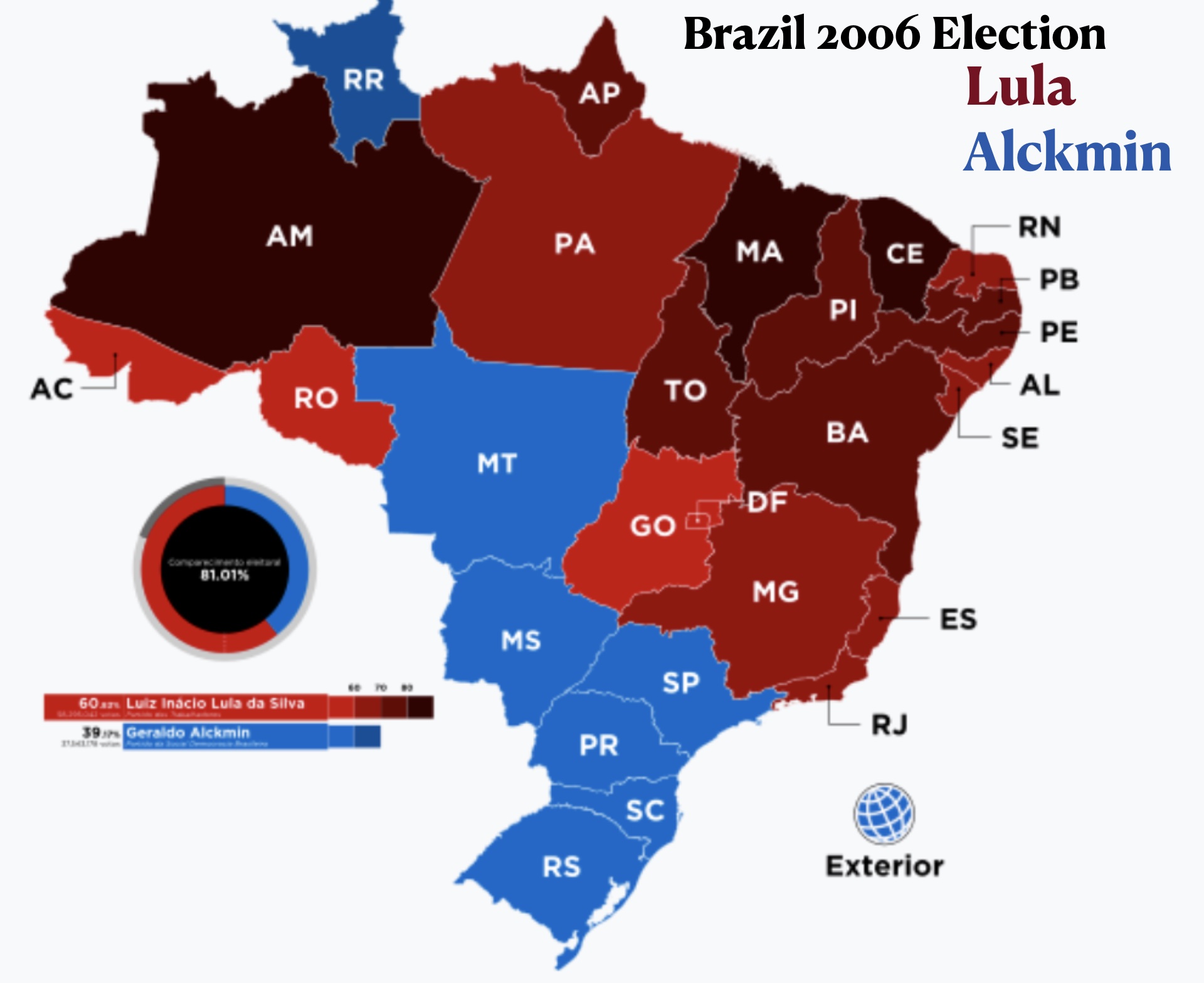 This stark electoral and economic divide has led many observers to worry that there are now “two Brazils” that will not be able to function well together. Lulu is also concerned about this split, which helps explain his partnership with Alckmin. He has also promised to try to heal the division. As Lula recently stated:

“My friends. As of Jan. 1, 2023, I will govern for 215 million Brazilians, and not just for those who voted for me. There are not two Brazils. We are a single country, a single people, a great nation,” he said. …

“We will find a way out so that this country can live democratically and harmoniously again,” he said. “No one is interested in living in a divided country, in a permanent state of war.”

State-level mapping, however, is of low-resolution and is therefore often misleading. But if we look at local level, the same correlation between voting behavior and economic development still holds (see the maps below). Here Minas Gerais does not seem exceptional, as its wealthier southwestern areas went for Bolsonaro and its poorer northeastern areas went for Lula. But again, there are other exceptions. Center-west Brazil, for example, is only moderately developed yet voted heavily for Bolsonaro. This seeming oddity will be explored in a later post. 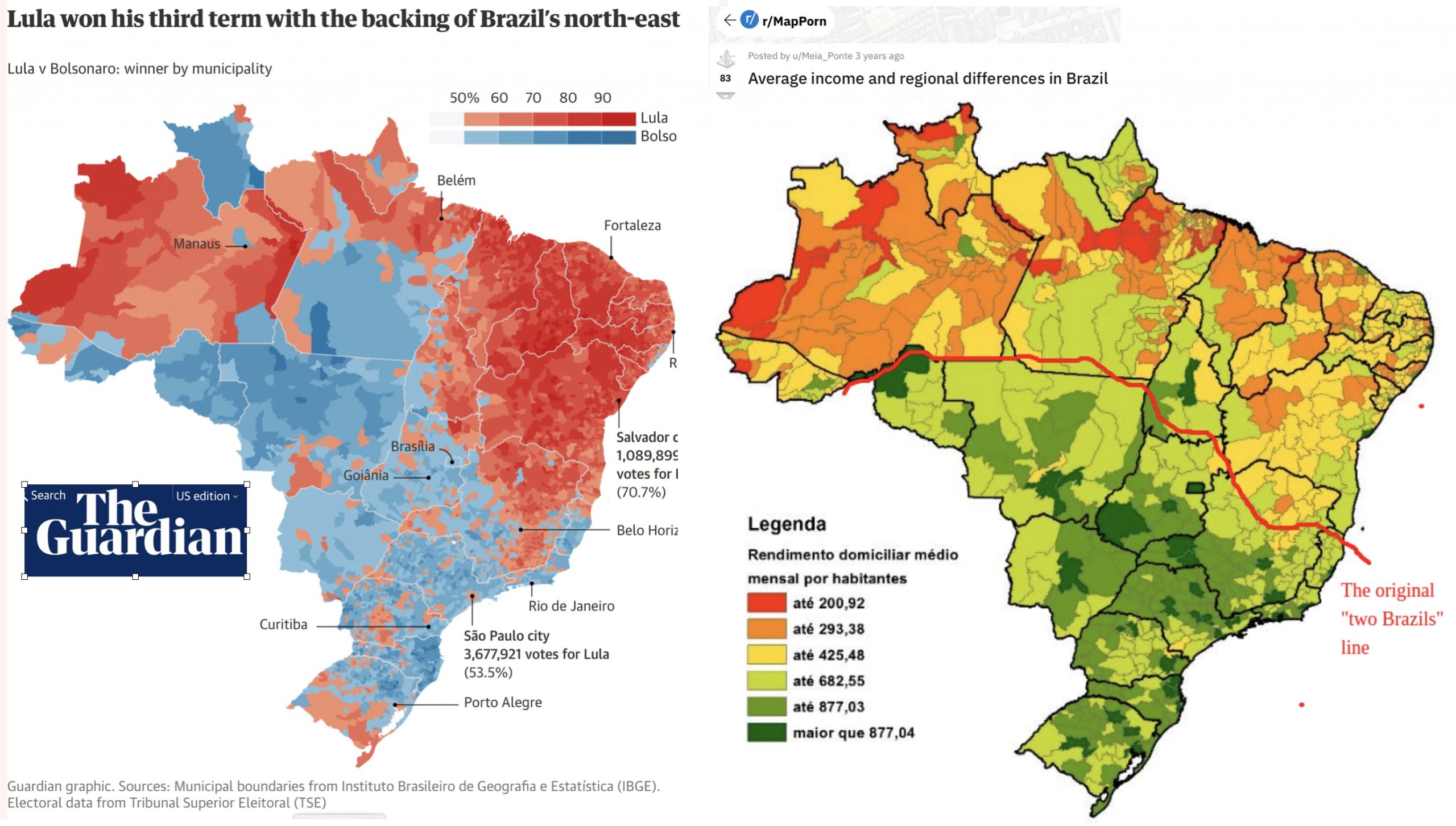 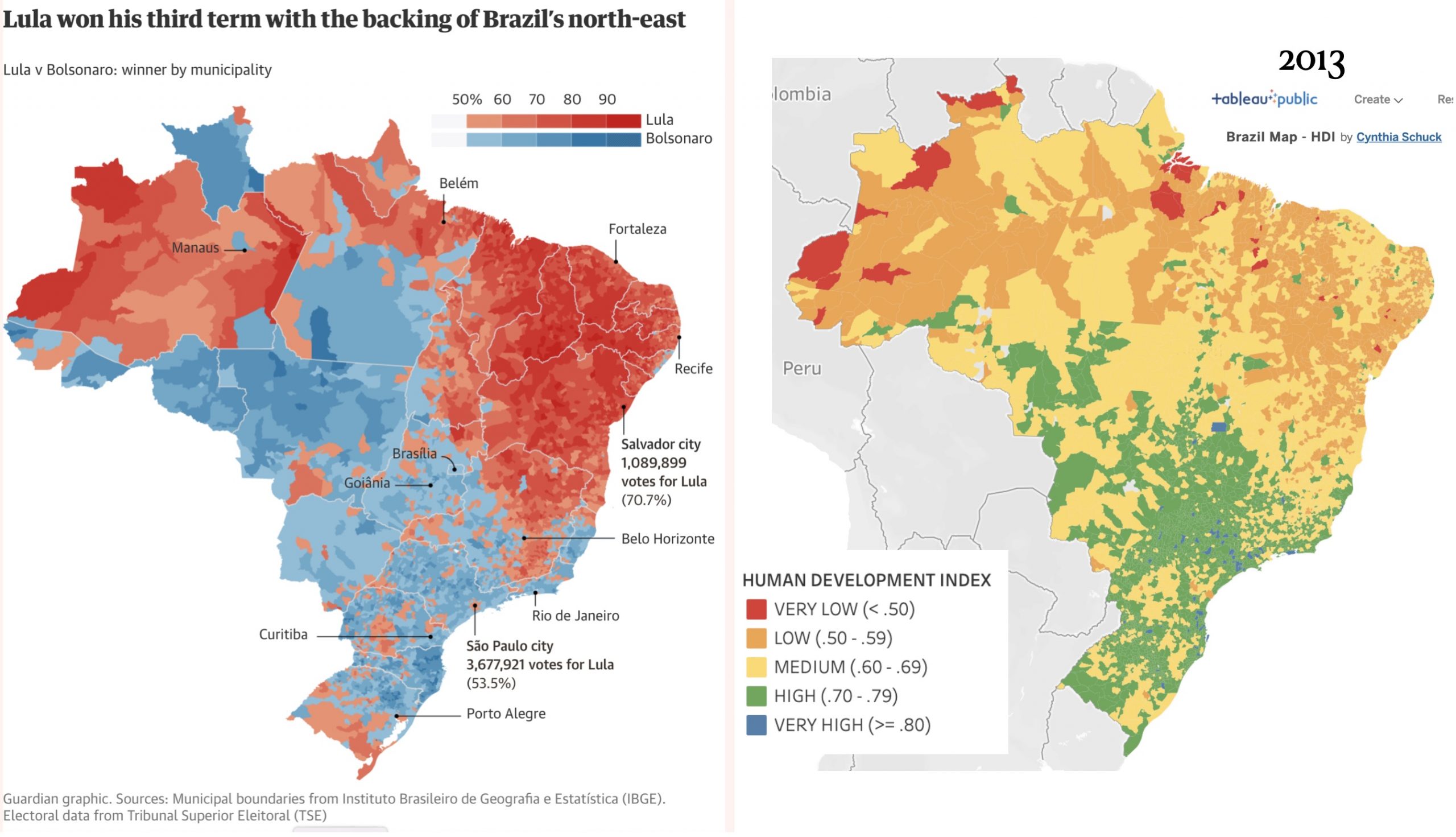