Indonesia and Malaysia have a long history of mutual distrust, despite—or perhaps because of—their similar historical and cultural backgrounds. Indonesia objected so strongly to the creation of an independent Malaysian state out of several British colonies in the early 1960s that it instigated a four-year undeclared war, the so-called Indonesian–Malaysian Confrontation (1962–1966). But with the fall of the Sukarno government in Indonesia and the creation of ASEAN (the Association of Southeast Asian Nations) in 1967, such tensions receded into the background. In recent years, arguments between the two countries sometimes seemed more comedic than threatening. A prime example would be the 2007 Rasa Sayang controversy, generated when prominent Indonesians accused Malaysia of “cultural theft” over its use of a popular folk song that originated in what is now part of Indonesia in a tourism campaign.

But latent mistrust between the two countries persists and sometimes surfaces more directly. Deep Indonesian concerns about Malaysia were clearly apparent earlier this year when the country’s 34rd province, North Kalimantan, was inaugurated along the Malaysian border despite Indonesia’s stated moratorium on the creation of new provinces. Although the official justification for the elevation of North Kalimantan to provincial status focused on development issues, an article in the Jakarta Post made it appear that geopolitical concerns were prominent. As the article noted:

Lawmaker Agun Gunandjar Sudarsa, who sits on House Commission II on regional autonomy, said that the endorsement of North Kalimantan would secure the loyalties of Indonesians living on the Malaysian border.   “North Kalimantan will be an open gate to enter Malaysia, the southern Philippines and Brunei Darussalam. Therefore, the province is a strategic location to counter threats against the unity of the nation from neighboring countries,” Agun said.   According to the Golkar Party lawmaker, the establishment of the new province would also prevent Malaysia from making territorial claims on Sebatik Island, which is divided between the nations, and in nearby Krayan subdistrict. 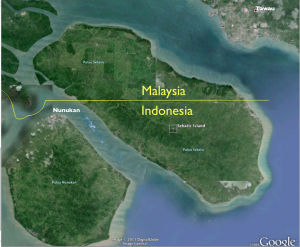 Although it hardly seems likely that Malaysia has designs on the Indonesian half of Sebatik, Indonesian concerns about the area are understandable. Population density and infrastructural development are much higher on the Malaysian side of the border. The third largest city in the Malaysian state of Sabah, Tawau (population 382,000), lies just across an ocean inlet from Sebatik, whereas the entire area that now constitutes the Indonesian province of North Kalimantan counted only 525,000 inhabitants in the 2010 census. Indonesian authorities have also identified the town of Nunukan, located just south Sebatik, as a human trafficking “hotspot,” from which poor Javanese women are sent to Malaysia under false pretenses. As a recent article in the Jakarta Globe notes, “Women from the provinces are often promised jobs with good salaries in Malaysia but are then forced to work at nightclubs or similar places.”

Geopolitical tussles have also recently broken out in the area. In March 2013, Malaysia forced Indonesian nationals living in its part of Sebatik to return to Indonesian territory. Its ostensible reason for doing so was its inability to protect the Indonesians from possible attacks by militants from the Philippines. The precipitating incident here was the so-called 2013 Lahad Datu Standoff, generated when 235 fighters professing loyalty to the long-defunct Sultanate of Sulu in the southern Philippines, and with links to radical Islamists groups, landed in a nearby town to assert dormant Philippine claims to the entire Malaysian state of Sabah. Malaysian troops eventually defeated and expelled the militants, killing 56 and capturing 79. Although the event seemed to some observers to be an odd mix of farce and tragedy, it revealed deep nationalistic tensions persisting between the Philippines and Malaysia, notwithstanding either ASEAN-engendered amity or the fact that the Philippine government had nothing to do with the Lahad Datu adventure. As reported in the Wikipedia:

On 3 March 2013, the website of Globe Telecom [a major Philippine company] was defaced by hackers claiming to be from the “MALAYSIA Cyb3r 4rmy”. The group left the message, “Do not invade our country or you will suffer the consequences.” Global Telecom confirmed its own website had been hacked but assured the public that no sensitive information was stolen. The website was restored at around noon the same day.

In apparent retaliation, hackers identifying themselves as from Anonymous Philippines, attacked several Malaysian websites. They warned Malaysia to “Stop attacking our cyber space! Or else we will attack your cyber world!” The website of Stamford College in Malaysia was also hacked with its front page replaced by a note that said: “The time has come to reclaim what is truly ours. Sabah is owned by the Philippines, you illegally [sic] claiming it.” 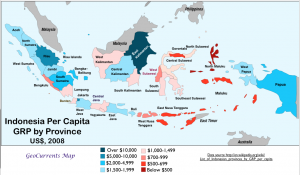 Regardless of possible underlying geopolitical issues, the creation of the Indonesian province of North Kalimantan did have an economic rationale. The new province was hived out of East Kalimantan, a resource-rich and rapidly growing part of Indonesia. Owing mostly to oil, natural gas, coal, and gold, East Kalimantan is by far the most economically productive part of Indonesia on a per person basis.* According to the most recent available statistics, the per capita GRP (Gross Regional Product) of the province was US$ 11,300, whereas those of second-place Jakarta and third-place Riau were US$ 8,200 and US $5,900 respectively. Although East Kalimantan is still lightly inhabited, with only about three million people in an area roughly the size of the United Kingdom, its population had been only 733,000 as recently as 1971. Most of the explosive growth in the area occurred in the southern coastal portion of the old province, especially in and near the capital city of Samarinda. By creating the new province, with a new capital city, Indonesian authorities are hoping to even out the developmental process. More rapid growth in the area may already be occurring; if the figures cited in the Wikipedia are correct, North Kalimantan gained more than 200,000 people between 2010 and 2013.** 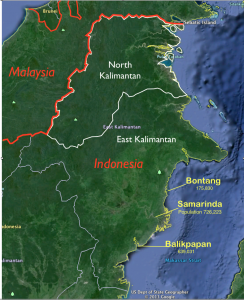 Environmentalists are concerned that the creation of a new project will accelerate deforestation in the region. In the rump province of East Kalimantan, little primary forest remains, covering only some fifteen percent of its territory. But in North Kalimantan, a land of few paved roads and minimal infrastructure of any kind, primary forests still cover 69 percent of the land. Such a situation is unlikely to persist for long.

* Such figures, it is essential to note, do not reflect average living standards, as the distribution of wealth is not considered and as much of the economic gains in resource-rich areas are taken by outsiders. On the map, such Indonesian provinces as Papua and West Papua appear to be relatively prosperous, but such prosperity reaches relatively few of their residents.