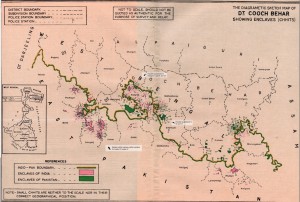 Progress on the India-Bangladesh border barrier has been slower than expected, due in part to difficulties in determining precisely where the border runs. Such problems might seem surprising. In the standard model of geopolitics, international borders are clearly delineated, one-dimensional lines that absolutely separate sovereign states. In practice, however, borders are often contested and sometimes indistinct—and few are as fraught as the boundary separating India from Bangladesh. The conflict is serious enough to have produced a micro-war in 2001, which according to some reports took 100 lives.

The origins of the Indo-Bangladeshi border dispute predate British colonialism. As in Europe, traditional polities in South Asia often consisted of dispersed territories. Lands sometimes passed back and forth among different rulers and dynasties, generating intricate arrangements that might eventually be inherited by modern countries. Such was the case in a large swath of the India-Bangladesh boundary. According to an often-told story, two rulers, the Raja of Cooch Behar and the Nawab of Rangpur, divvied plots of land with abandon. As related in a Time magazine story:

the rulers … staked games of chess with plots of land. To settle their debts, they passed chits — pieces of paper representing the territory won or lost — back and forth. When Sir Cyril Radcliffe, the law lord who partitioned India, drew the 1947 border, Cooch Behar went to India and Rangpur to Bangladesh — including the people who lived on the two kings’ 162 “chit mahals,” or paper palaces. 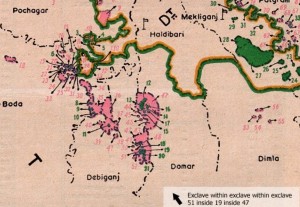 Regardless of the story’s accuracy (see Editstreet for an alternative view), the Indo-Bangladeshi border in the vicinity of Cooch Behar remains staggeringly complex. On the Indian side of the main demarcation line, one finds 92 pieces of Bangladesh, while on the Bangladeshi side one finds 106 Indian exclaves. (The map posted here predates Bangladesh’s independence from Pakistan, but the same situation obtained afterward.) As can be seen, some plots are doubly enclaved: in other words, a few Bangladeshi territories are wholly surrounded by Indian territory, which in turn are wholly surrounded by Bangladeshi territory. Although not easily visible on the map, another level of complexity is encountered as well. As Evgeny Vinokurov recounts in his A Theory of Enclaves (2007, Lexington Books), Dahala-Khagrabari is a sliver of India (a jute field, more or less) engulfed by Bangladeshi land that is enclosed by Indian land that is encircled by Bangladeshi land, thus forming, in technical parlance, a counter-counter-enclave.

India and Bangladesh agreed to clean up their border with land swaps as early as 1974, since a politically fractured landscape creates humanitarian as well as geopolitical concerns. Initial talks came to nothing, however, and the resulting tensions provoked the 2001 border clash. That conflicted ended with promises of renewed negotiations, but subsequent progress was minimal. The Wikipedia describes conditions in the enclaves today as “abysmal,” while Sujit Roy depicts them as hellish places where “looting, arson, rape, [and] murder, is all in a day’s work.” Construction of the border barrier raised the stakes, resulting in a resumption of talks in 2010 and 2011. Resulting land exchanges may clarify the divide between the two countries, but they will not necessarily benefit the inhabitants of the aberrant territories. According to Sujit Roy, “As soon as news of settlement arrived…, land sharks became active and started evicting people forcibly, especially in the Indian enclaves in Bangladesh.” The result, Roy claims, is “a new chapter of woes” for the roughly 200,000 inhabitants of the enclaves.

Fencing off India from Bangladesh does not require the elimination of all enclaves, or even a precise delineation of the border. By international convention, barriers between countries are not supposed to follow the actual borders, but are rather to parallel them 150 meters inside the country responsible for the fencing. By honoring this provision, India has walled off some of its own territory. A number of Indian hamlets now find themselves on the Bangladeshi side of the fence, generating serious hardships for their residents. Farmlands are also being partitioned. According to the revenue and finance minister of the Indian state of Tripura, in his state alone “over 8,730 Indian families’ homes, paddy fields, lands, farms and other assets had fallen outside the fence,” encompassing “over 19,359 acres of land.”

Due both to such dislocations and to topographical constrains, India has been negotiating with Bangladesh for leeway. In early 2011, Bangladesh agreed to let India run the barricade along the official border in certain areas. But any such “zero-line” partitioning, Bangladesh insists, can only entail a single line of barbed-wire fencing. Indo-Bangladeshi negotiations also led to a recent announcement that the two countries would agree to “joint inspection of 20 out of the 46 unfenced patches along the border.” 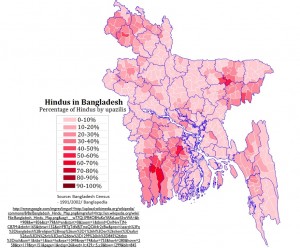 Bangladesh’s cooperation with India is likely linked to its desire for concessions on related issues. Dhaka’s economic concerns were discussed in last Thursday’s post; also to note is its call for New Delhi to crack down on opponents of the Bangladeshi government active on Indian soil. Of particular concern is Bangabhumi Andolan, an organization dedicated to carving out a Hindu-dominated country from southeastern Bangladesh. Although Hindus are relatively numerous in this region (see map), they are still clearly outnumbered by Muslims. Bangabhumi Andolan hopes to create a Hindu majority through the immigration of those who left or were forced out of the region during and after the partition of 1947, although the removal of Muslims would probably be necessary as well. In 2003, movement organizers symbolically declared the independence of the Hindu Republic of Bangabhumi (alternatively called Bir Bango). 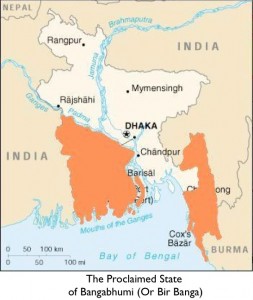 Although Bangabhumi Andolan does not seem to be very potent, Bangladesh is worried. According to Bangladeshi sources, “the movement has set up more than a dozen training centres with clandestine supply of money and arms … with the objective of arms struggle for creation of the Hindu land.” It has also staged public rallies on Indian territory, most recently in July 2010. Both Bangladeshi and Pakistani sources have accused India of supporting Bangabhumi Andolan in order to destabilize Bangladesh. According to Pakistan Defense, the Indian external intelligence agency RAW (Research and Analysis Wing) created the group in order to “disintegrate Bangladesh.” Several hard-core Hindu nationalist groups have rallied to the cause. A 2003 article on an extremist website asks, “how long can the Hindus live under House-Arrest in the Barbaric Bhoot-Bangla of Bangladesh?” The article itself is tellingly entitled, “Recognize The New Hindu State As You Cowards Recognize Islamic Bogusdesh.” (According to the website in which it appears, Bangladesh is a “bogus” country—hence “Bogusdesh”—originally “created by the British … [as East Pakistan] to cut off direct land, spiritual, trade and cultural communications between Hindu Bharat and Buddhist Myanmar.”)

If the Indian intelligence agency RAW has indeed created Bangabhumi Andolan to use against Bangladesh, it could be playing with a two-edged sword. Recent reports claim that the organization also wants to hive off a section of the Indian state of West Bengal for its proposed country, thus potentially diminishing India. It is entirely possible, however, that Bangladeshi partisans would regard such claims to Indian territory as a mere smokescreen, designed to superficially distance Bangabhumi Andolan from its handlers in Indian intelligence. In South Asian geopolitics, such allegations of subterfuge are hard to escape.