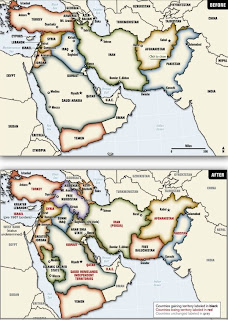 In 2006, Armed Forces Journal published a short, map-illustrated article by retired U.S. Army Lieutenant Colonel, novelist, and pundit Ralph Peters. In “Blood Borders: How a Better Middle East Would Look,” Peters argued that “unjust borders” drawn by “self-interested Europeans” were generating many of the Middle East’s problems. Changing state boundaries to reflect the “organic frontiers” of religion and ethnicity, he suggested, would reduce tensions and enhance justice. Peters insinuated that only radical remapping would allow the United States to withdraw its military: “If the borders of the greater Middle East cannot be amended to reflect the natural ties of blood and faith, we may take it as an article of faith that a portion of the bloodshed in the region will continue to be our own.”

“Blood Borders” did not make a major impression in the United States; few Americans have even heard of it. The same cannot be said for the greater Middle East. In the countries that Peters would pare down, his article generated widespread – and on-going – outrage. Iranian nationalists point to “Blood Borders” when arguing that the United States seeks to dismember their country. Sentiments are if anything stronger in Pakistan. A professionally produced Pakistani map entitled “Operation Enduring Turmoil” (see above) portrays a slightly modified Peters scheme as part of a conspiracy to thwart China and diminish Pakistan, allegedly masterminded by the Project for a New American Century (a defunct neoconservative think-tank). The general tenor of Pakistani public opinion is reflected in the first two sentences of a March 24, 2010 article in The Dawn: “Ralph Peters of ‘creating-the-map-of-independent-Balochistan’ and then getting it published in a Defense journal, continues to write. It seems like Mr. Peters is still living in the 80s, and can [only] see Iran and Afghanistan through the eyes of an old decrepit Cold War protagonist.” 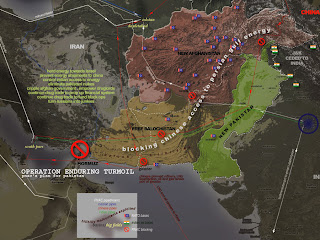 It is worth examining the logic behind this infamous map more closely. One might imagine the “blood” in “Blood Borders” to connote genetic ties, but Peters’s groupings are founded on commonalities of language and religion, not those of genes. In his schema, four new countries would emerge: two—Kurdistan and Baluchistan—based on language, and two others—an Arab Shia State and an Islamic Sacred State—on largely religious grounds. The latter two do not have strong national roots. Very few Gulf Shiites have ever sought to build a single nation-state around their faith. Peters’s Islamic Sacred State, moreover, deviates completely from his cultural-nationalist foundation. The criterion for independence here is apparently instrumental: to remove Mecca and Medina from the Saudi state and the Wahabbi religious establishment. 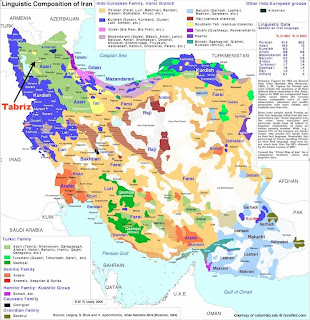 Kurdistan is surely Peters’s most favored nation. The lack of a Kurdish state, he argues, is the “most glaring injustice in the notoriously unjust lands between the Balkan Mountains and the Himalayas.” Yet his own Kurdistan would do injustice to the Iranian Azeris, who would have to give the Kurds their core territory in and around the city of Tabriz. The logic behind such a maneuver is blatantly one of geopolitical advantage for the United States: “A Free Kurdistan, stretching from Diyarbakir through Tabriz, would be the most pro-Western state between Bulgaria and Japan.” Peters does not indicate what would happen to the Azeri-speaking inhabitants of the area, but he does offer a hint: “Oh, and one other dirty little secret from 5,000 years of history: Ethnic cleansing works.”

The rest of Iranian Azeri territory would go to Azerbaijan, roughly doubling its population. This “Greater Azerbaijan,” however, also has a weak national foundation. Although the northern Azeri and the southern Azeri speak the same language, they do not tend to see themselves as forming a single political community. The people of Iranian Azerbaijan, by and large, consider themselves to be Iranian, despite their irritation with Persian education. Peters’s expanded Azerbaijan would also apparently include a sizable non-Azeri region, Nagorno-Karabakh. Armenian-populated Nagorno-Karabakh is officially part of Azerbaijan, but is currently under the control of a break-away “republic” closely linked with Armenia. Peters’s map implies that Azerbaijan should reclaim this area.

Contrary to Iranian and Pakistani claims, Peters’s geopolitical strategy is not that of the United States. U.S. foreign policy here, as elsewhere, rests on the assumption that boundaries between countries should stay as they are. Peters detests this idea: “the greatest taboo in striving to understand the region’s comprehensive failure … [is] the awful-but-sacrosanct international boundaries worshipped by our own diplomats.” In rearranging the geopolitical framework, Peters would reward several US allies, but he would punish others. Pro-U.S. Jordan would gain a substantial slice of northwestern Saudi Arabia, but Turkey, Pakistan, and Saudi Arabia would suffer. Turkey would lose its east to Kurdistan – even its far northeast, which is not Kurdish speaking. Pakistan and Saudi Arabia would not so much lose territory as be dismembered. Peters views the governments of Pakistan and Saudi Arabia as false friends scheming against U.S. interests while cooperating on the surface. The dissection of Saudi Arabia in particular is depicted as necessary for future regional peace and stability: “The rise of the Saudis to wealth and, consequently, influence has been the worst thing to happen to the Muslim world as a whole since the time of the Prophet, and the worst thing to happen to Arabs since the Ottoman (if not the Mongol) conquest.”

Peters’s assertion that an independent Kurdistan would be pro-US may be plausible. I am not so sure, however, that an independent Baluchistan would ally with the United States, except perhaps out of necessity. The same can be said for a potential Arab Shia State, in which anti-American sentiments would run strong. Such a country would be both wealthy and powerful, encompassing most of the oilfields of Saudi Arabia, Iran, and southern Iraq, while virtually encapsulating oil-rich Kuwait. The creation of such an oil giant would likely terrify and infuriate Sunni Muslims, as well as Persian and Turkic Shiites, across the region.

Note that Peters’s Arab Shia State also deviates from his ostensible ethno-religious basis of division. Arabic-speaking, Shia-majority Bahrain, for example, would be excluded, while substantial Persian-speaking areas would be included (in the map above, such areas are mapped as “Bandari,” speaking the coastal or port-city form of Persian).

“Blood Borders” is obviously a problematic and provocative article, as we shall see in greater detail in tomorrow’s post.