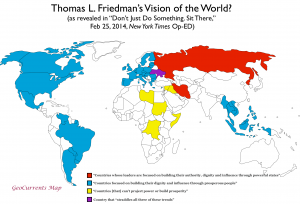 The February 26th print edition of the New York Times featured an intriguing opinion piece by columnist Thomas L. Friedman entitled “Don’t Just Do Something. Sit There.” Here Friedman invokes a scheme of global geopolitical division that he evidently developed with his former co-author Michael Mandelbaum, a professor of foreign policy at Johns Hopkins. This three-fold scheme, designed to replace the Cold War vision, is based primarily on the attitudes of ruling elites. Quoting Mandelbaum, Friedman maintains that, “The biggest geopolitical divide in the world today ‘is between those countries who want their states to be powerful and those countries who want their people to be prosperous.’” Friedman does not flesh out a comprehensive division of the world here, as he only places only a select group of countries in each category. Still, what he does mention is both interesting and bizarre.

Friedman’s first category includes Russia, Iran, and North Korea, as well as, presumably, a number of unspecified countries. What they have in common, he claims, is “leaders [who] are focused on building their authority, dignity and influence through powerful states” and their ability to “defy the global system and survive, if not thrive — all while playing an old, traditional game of power politics to dominate their respective regions.” Although these three countries are all authoritarian (to varying degrees), Friedman’s larger argument is highly exaggerated. North Korea is certainly a deeply repressive state that seeks to intimidate its opponents, but is it realistic to claim that it is seeking to “dominate [its] respective region,” which includes China and Japan? Is that really the “game” (Friedman’s term) that its government is playing?

It is Friedman’s second category, however, that is the real problem. Here one finds countries that are supposedly

focused on building their dignity and influence through prosperous people … These countries understand that the biggest trend in the world today is not a new Cold War but the merger of globalization and the information technology revolution. They are focused on putting in place the right schools, infrastructure, bandwidth, trade regimes, investment openings and economic management so more of their people can thrive in a world in which every middle-class job will require more skill and the ability to constantly innovate will determine their standard of living. (The true source of sustainable power.)

That is an impressive list of attributes, and I would certainly cheer on any country so devoted to enhancing the skills and living standards of its citizens – but I am not sure if any exist. Certainly some states do a better job on these issues than others, and I would not object to placing, say, South Korea, the Netherlands, and Finland in such a category. I find Friedman’s list, however, downright delusional.

Here is how Friedman defines his second category: “all the countries in Nafta, the European Union, and the Mercosur trade bloc in Latin America and Asean in Asia.” All the countries of the EU? That seems a bit of a stretch. Can one really argue that the governments of Italy, Greece, and Bulgaria (to name just a few) have been “focused” on building mass prosperity in such a manner over the past decade? If so, they have hardly been successful. Including all of the ASEAN states of Southeast Asia is more problematic still. Burma has recently made some real and important reforms, but it has hardly transformed itself into a mega-Singapore, the only Southeast Asian country that really fits Friedman’s description—and which itself suffers a rather serious democracy deficit. But it is the placement of Mercosur in the same group that really boggles my mind. Argentina and Paraguay are troublesome enough, but to claim that Venezuela is focused on enhancing the prosperity of its people is beyond bizarre. Either Friedman has no idea of what has been happening in Venezuela over the past decade or he has no idea what Mercosur is. Either way, I must question his ability to serve as a columnist for the New York Times, supposedly the “newspaper of record” of the United States.

Friedman’s third category, composed of countries that “can’t project power or build prosperity,” makes more sense, although the question is not so much whether they can “project power” as whether they can maintain internal order—which they can’t. This “world of disorder” includes Syria, Libya, Iraq, Sudan, Somalia, D.R. Congo and “other hot spots.” But why is Afghanistan not mentioned? And what exactly are the world’s “other hot spots.” Could they include violence-torn Mindanao in the Philippines or the Kachin area of northern Burma? No, they can’t, as these regions have already been placed in the happy world of development and responsible leadership.

Finally, Friedman places Ukraine in a category of its own, claiming that it “actually straddles all three of these trends.” Actually, it does not. Ukraine is not trying to dominate its region; it just tries to avoid being dominated by Russia. Ukraine has not been “focused” on “building dignity and influence through prosperous people,” particularly when it comes to women. And finally, Ukraine is not a “world of disorder,” although unfortunately it might become one.