Balochistan and a New “Great Game” in Central Asia? 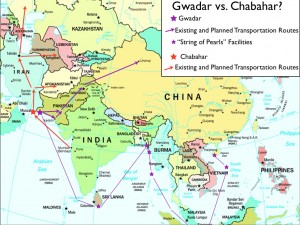 “Pakistan has given China a base at Gwadar in the heart of Baluch territory. So an independent Baluchistan would serve U.S. strategic interests in addition to the immediate goal of countering Islamist forces.” – Selig Harrison, 2011

Balochistan is an impoverished region beleaguered by insurgency and ethnic strife. But it is rich in resources and it occupies an increasingly vital geo-strategic position. As a result, Balochistan has been the focus of massive infrastructural projects. Iran and Pakistan are developing competing port, rail, and highway networks, hoping to funnel the trade of Central Asia through their own national territories. As neither country can handle the costs and technical challenges on its own, both are partnering with other states; Pakistan has turned to China, and Iran to India. As a result, rivalry between Iran and Pakistan is mounting. Baloch insurgents, not surprisingly, have targeted the new projects, provoking military escalation. 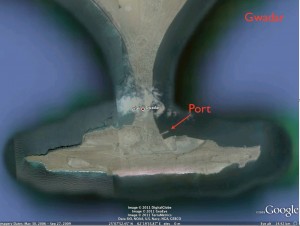 Pakistan’s main initiative in Balochistan begins at the port of Gwadar, not far from the Iranian border. Gwadar was a minor fishing outpost on a sparsely settled coast through most of the 20th century. In 1993, the Pakistani government selected it for port development, hoping to ease the congestion at Karachi and to tap the future trade of Central Asia. Construction, carried out by China, began in 2002, and by 2008 the facility was operational. Management of the tax-free port is currently contracted out to PSA International, formerly the Port of Singapore Authority.

As the harbor was going in, so too were transportation lines. Prior to the construction of the Makran Coastal Highway (2002-2004), travel between Gwadar and Karachi required several days over rough dirt tracks; now it can be done in six hours. Another new road links Gwadar to northern Sindh, and 2007 saw the development of the New Gwadar International Airport. Other plans for Gwadar include shipbuilding facilities, natural gas pipelines, and a military base. According to the official website, the port will “act as a catalyst for a large number of related projects like: trans-shipment of bulk cargo; oil storage, refinery, and petrochemicals; export processing and industrial zones; export of minerals/livestock; and services (hotels, accommodation, tourism).” In April 2011, Pakistan announced that it was negotiating with China to connect Gwadar with the Pakistani rail network, which would entail laying more than 900 kilometers of track. In the same month, general Ashfaq Kayani announced plans to establish a military institute of technology in the city.

China’s involvement with the project extends well beyond construction and financing. The Chinese government foresees Gwadar as the terminus of a “back-door” transportation corridor into western China. A proposed pipeline would carry crude oil from the port to Xinjiang, enhancing Chinese energy security. Several US security analysts claim that China will also use Gwadar for military purposes, part of its “string of pearls” strategy designed to project power into the Indian Ocean and secure access to key Middle Eastern and African resources. China denies military ambitions, claiming that it seeks a “harmonious ocean.” The United States and India are not convinced that Chinese designs are fully peaceful. It has thus been suggested—notably by the Heritage Foundation—that the two countries will need to forge an alliance to counter-balance China in the region. Such a partnership may yet materialize, but it faces a huge obstacle in Iran. New Delhi is already collaborating with Tehran on a competing port, located only forty-seven miles (seventy-five kilometers) from Gwadar. 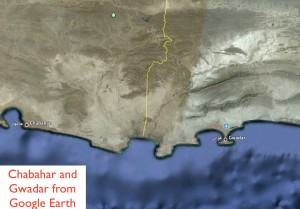 The Iranian port of Chabahar was also a relatively small town before it was selected for infrastructural development. The initial plans were hatched under the shah, with help from the United States. The Iranian revolution of 1979 put the project on hold, but it was revived during the Iran-Iraq war, when shipping through the Strait of Hormuz was periodically paralyzed. Hoping to jump-start its economy, Iran created the Chabahar Free-Trade Industrial Zone in 1992. Chabahar is now slated to become a tourist destination and a center of higher education. The International University of Chabahar, established in 2002, offers engineering, business, and computer science degrees, in collaboration with the University of London and the London School of Economics.

Iran has been expanding Chabahar’s port facilities in hopes of capturing some of the foreseen Central Asian trade that would otherwise be funneled through Gwadar. India has signed on, helping upgrade the port and building new road and rail linkages. The plan is to connect Chabahar to Afghanistan, former Soviet Central Asia, and Russia; ultimately a “multi-modal transport link” is supposed to reach St. Petersburg. Iran and India are also discussing a possible natural gas pipeline that would snake along the seabed from Chabahar to India, by-passing Pakistan. 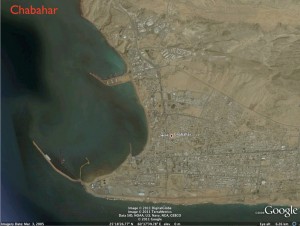 Progress on the Chabahar port has been slower than planned. According to a March 2011 Reuters report, “Indian officials now believe that Iranian reluctance to move faster on Chabahar may be linked to its anxieties about the troubled Sistan-Baluchestan region where Shi’ite Muslim Iran is trying to put down a Sunni Muslim insurgency.” India wants to expedite the project, as it is desperate to obtain a backdoor corridor into Afghanistan that avoids Pakistan. India has already, at great cost and danger, built the 218-kilometer Zaranj-Delaram highway in Afghanistan, which it hopes to connect to the new port.

The geopolitical and economic intrigue currently underway in Baluchistan fits into what is sometimes called the “New Great Game” (the original having been the 19th century contest between the British and Russian empires for influence in the same region). As before, the geopolitical considerations can be intricate. According to the Wikipedia, the New Great Game involves “competition between the United States, the United Kingdom and other NATO countries against Russia, the People’s Republic of China and other Shanghai Cooperation Organisation countries for ‘influence, power, hegemony and profits in Central Asia and the Transcaucasus.’”

The Wikipedia’s depiction of the New Great Game does not match the competition being waged between Gwadar and Chabahar. The Shanghai Cooperation Organization is not a real alliance, and its two largest members, Russia and China, find themselves on opposite sides of this particular rivalry. It is also questionable where the United States and the rest of NATO figure in. Despite its (fraying) alliance with Islamabad, the US is excluded from the Pakistan-China linkage, and despite its evolving ties with New Delhi, it is excluded from any nexus that involves Iran. And despite Selig Harrison’s fond desires, it is highly unlikely that the United States will be able to partner with an independent Balochistan anytime soon. The US and NATO, it would seem, are sitting out this round of the New Great Game.