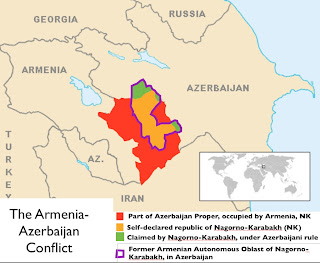 Relations between Iran and Azerbaijan are rapidly warming. In early May 2010, the two countries signed a security memorandum, promising to cooperate on issues ranging from drug smuggling to human trafficking to terrorism. Iran’s foreign minister framed the bilateral relationship as one between “friendly, fraternal and neighboring countries.” On May 5, Azerbaijan’s defense minister pledged that “No threat will be made against Iran from Azerbaijan’s territory and we will not help the enemies of the Islamic Republic of Iran under any circumstances.”

Until recently, the relationship had been frosty. Iran has long railed against Azerbaijan’s ties with the United States and Israel, while Azerbaijan has denounced Iran’s friendship with Armenia. Iran took umbrage at a 2006 World Congress of Azerbaijanis in Baku, where participants mooted the idea of a “united Azerbaijan” and charged the Iranian government with human rights abuses against Azeris in northwestern Iran. Iran’s clerical establishment still fumes at the burgeoning tourist trade. The Atlantic recently showcased Astara, Azerbaijan as the “Tijuana of the Caspian” where “everything’s for sale,” ranging from sex, to liquor, to body piercings, to astrological forecasts – even during Ramadan. “It’s common knowledge,” reported an Azerbaijani Ministry of Foreign Affairs official, “that the Iranians want the border shut down.” Yet in early May 2010, Baku and Tehran agreed to build a $220 million trans-border bridge in Astara to encourage the transit of goods and people.

The turnabout in Iranian-Azerbaijani relations stems in part from the increasing stress between Washington and Baku. Over the past year, the United States has pushed hard for rapprochement between Turkey and Armenia, with a small measure of success. By seeming to favor Armenia, the U.S. has irked Azerbaijan; as long as Armenia and its client quasi-state of Nagorno-Karabakh occupy a large swath of Azerbaijan’s official territory, Azerbaijan will remain Armenia’s foe. According to Alexander Jackson, Azerbaijan’s government also feels slighted by the United States. Washington has reportedly failed for eight months to send an ambassador to Baku. More egregiously, Azerbaijan was not invited to the Nuclear Security Summit in April 2010. Armenia and Turkey were; their leaders came, and they spoke with President Obama about the region and its problems. In late April, Azerbaijan cancelled a joint military training exercise with the U.S.

The Caucasus is probably the second most ethno-linguistically diverse place in the world (after New Guinea), and it surely forms one of the most complex geopolitical chessboards. Any move to improve relations with one nation appears to result in worsened relations with another. The United States may well want better ties with Armenia, but they will come at the expense of those with Azerbaijan.

In terms of immediate geopolitical calculation, the U.S. would lose raw advantage if it were to shift favor from Azerbaijan to Armenia. Oil-rich Azerbaijan is a much wealthier country. Its total GDP is estimated at $86 billion, its annual exports at $13 billion, and its 2009 economic growth rate at 9.3 percent; Armenia’s total GDP is estimated at $16 billion, its exports at $715 million, and its 2009 growth rate at negative 15 percent. All the same, tilting toward Armenia could help satisfy other current U.S. objectives, notably reducing the tension between Washington and Moscow. Armenia and Russia are tightly allied. The Russian 102nd Military Base is located in Gyumri, Armenia, a few miles from the Turkish border, and according to the provisions of a 1997 treaty of friendship, Armenia must allow Russia to patrol its frontiers with Turkey and Iran.