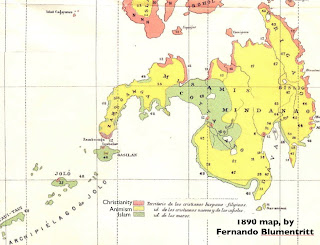 Last Friday’s post on the Maguindanao Massacre in the southern Philippines linked the event to a combination of Philippine electoral politics and privatized military forces. Deeper roots are found in centuries-old imperial conflicts and religious rivalries. Islam was spreading northward through the Philippines when the Spaniards arrived in the late 1500s. Although the Spanish colonial regime successfully introduced Christianity to the northern and central islands, Islam remained entrenched in the southwest. Despite Spanish claims to the entire archipelago, the Muslim sultanates of Mindanao and the Sulu islands resisted colonial power. Spain maintained strongholds, such as Zamboanga on the southwestern tip of Mindanao, but never effectively ruled most of the region. As can be seen on the map above, Islam and animism dominated the southern Philippines in 1890, with Christianity largely limited to the northern and eastern coastal zones of Mindanao. 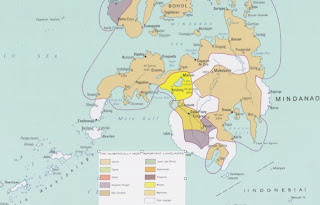 When the United States gained control over the Philippines at the beginning of the 20th century, it too had great difficulties subduing the south. But by 1913, Mindanao and the Sulu Archipelago were effectively under American rule. This set the stage for the southward migration of Christian Filipinos. With Philippine independence in 1946, the migration stream intensified. As the second map above shows, the dominant language across most of Mindanao is now Cebuano, originally from the island of Cebu in the central archipelago. As Christians moved into formerly Muslim or animist areas, ethnic tensions heightened. Entrenched poverty in the Muslim-majority areas contributed to anti-government sentiments. By the late 1960s, the southwestern Philippines was again in open rebellion, now under the leadership of the Moro National Liberation Front (MNLF). 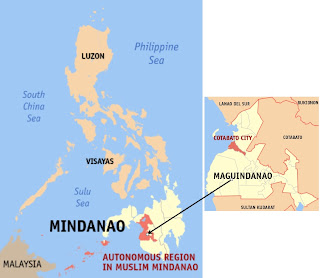 Even if a comprehensive deal can to be reached with the MILF, the insurgency in the southern Philippines will probably not end. The most violent and radical Islamist group in the region is Abu Sayyaf, an al-Qaeda-linked organization that shows no indication of wanting to make a deal. Although recent reports emphasize the military losses that it has recently suffered, Abu Sayyaf retains the capacity for violence. On February 27, 2010, its militants attacked the village of Tubigan on the island of Basilan, killing 11 people. As the Philippine Daily Inquirer reported, “The attack on Tubigan came barely nine hours after authorities rescued the two Chinese nationals that [the] group had abducted in November, along with a local. The local, Marquez Singson, had been beheaded.”