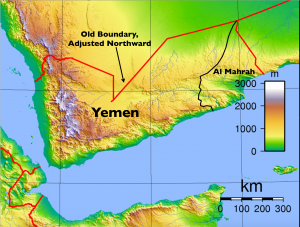 Yemen’s Al Mahrah Governorate has much in common with Oman’s adjacent Dhofar Governorate. The two areas share the seasonally humid landscape of the south-central Arabian coastal uplands, and both have large non-Arabic-speaking communities, which instead speak languages in the Modern South Arabian group. Both Al Mahrah and Dhofar also maintain a strong sense of distinctiveness from the rest of Yemen and Oman respectively. Dhofar, however, has made peace with its incorporation into Oman, following a prolonged struggle in the 1960s and ‘70s. Al Mahrah did not experience anything like the Dhofar Rebellion, but today it finds itself in a precarious situation, owing mainly to the near collapse of Yemen. 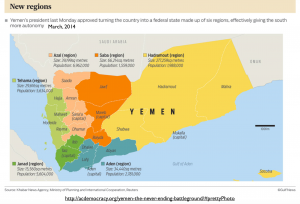 As Yemen began to unravel in 2014, its government hatched a plan to try to keep the country together by turning it into a federation composed of six semi-autonomous regions. Yemeni officials thought that this plan could satisfy the aspirations of southern separatists as well as those of other disgruntled regional forces. But it quickly backfired, as the Zaidi Shia Houthi rebels of the north concluded that the proposal would, as reported by J. Millard Burr, “only cement Yemen’s existing uneven distribution of wealth.” As a result, the Houthi rebels surged ahead, forcing the governmental forces to retreat from the densely populated northwestern highlands.

The plan for a federal Yemen also went over poorly in Al Mahrah Governorate. The main problem here is that the proposal would put Al Mahrah in the Hadhramout region, which is a very different place in terms of both cultural geography and historical development. The Mehri-speaking people in particular tend to be suspicious of the Hadhrami people of the Hadhramout, but even the Arabic-speakers of Al Mahrah overwhelmingly reject the six-region federal plan. An October 2014 National Yemen article, quoting Elisabeth Kendall, senior research fellow in Arabic and Islamic Studies at Pembroke College, Oxford University, explains the situation:

[P]lans to transform Yemen into a six-region federation are deeply unpopular in Al-Mahra, which would be lumped together with Hadramawt, the neighbouring governorate and Al-Mahra’s long-time foe due to lingering animosity since 1968 when Al-Mahra was overrun by socialist forces entering from Hadramawt, said Kendall.

One of the few Western researchers to gain regular access to eastern Yemen, Kendall helped conduct in April and May a poll of Al-Mahra electorate in which 99 percent of 34,000 respondents said they opposed the idea of a merger with Hadramawt.

“If something is going to be instituted which is that strongly against the wishes of a well-armed people with not much to lose, I think you’re going to have a civil war,” she said. 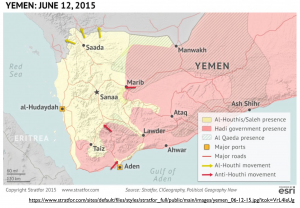 Although the most recent maps of the political situation in Yemen show Al Mahrah remaining under the control of the Saudi-backed, internationally recognized government of Abd-Rabbu Mansour Hadi, its hold on the region is not secure. According to Kendall, two-thirds of the local inhabitants do not believe that they benefit from being part of Yemen, and resentment against Hadi “runs high” throughout the region. Deep poverty and a lack of infrastructure exacerbate the situation. One result of such problems, Kendall claims, is an underground economic system: “Their economy is largely illegal – it’s smuggling drugs, guns, weapons and people.” Al Mahrah has also 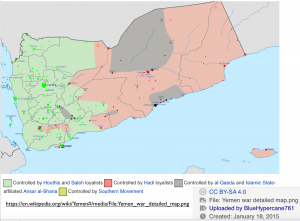 been plagued by Islamist extremist groups infiltrating from the west. Kendall argues that the people of Al Mahrah have little sympathy for extremists, noting that they “have taken to patrolling their capital al-Ghayda and its border with Hadramawt to prevent incursions by the jihadist group.” But she also fears that al-Qaeda could gain a foothold in the region if its problems are not addressed, and further worries that the destabilization of Al Mahrah could lead to a humanitarian disaster.

The situation in the neighboring Dhofar Governorate of Oman could hardly be more different, owing largely to the political stability and successful developmental programs of the Omani state. Not surprisingly, Oman is concerned about the chaos along its western border. One of its proposed responses is a separation barrier, and it has been negotiating with an Indian firm to 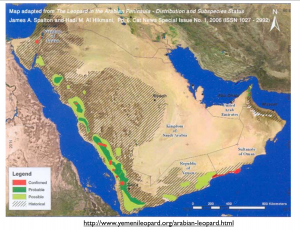 commence construction. This proposal, not surprisingly, is highly controversial. Elisabeth Kendall fears that by cutting off smuggling routes and preventing the cross-border movements of cattle herders it could drive some local people into the fold of Islamic extremism. Omani and Yemeni environmentalists are also wary of the project. Of particular concern is the Arabian leopard, whose last remaining redoubt of any size is the Dhofar highlands. As Al Jazeera reported in May 2014:

“[The border fence] would cut the population [of Arabian leopards] in two,” Abdulrahman al-Eryani, Yemen’s former Minister of Water and the Environment, told Al Jazeera. The creation of two distinct breeding groups unable to access each other for mating – already from one decimated population – could prove disastrous, he said.

It is unfortunate for both the people and the leopards of Al Mahrah that they ended up on the Yemeni side of the border. That they did was largely an accident of political history. From the 16th century, the region formed the Mahri (or Mahra) Sultanate of Qishn and Suqutra, which, as its name indicates, included as well the island of Socotra. At times the Mahri Sultanate was under the hegemony of Oman, but it remained an autonomous polity. In 1866 the mainland portion of this 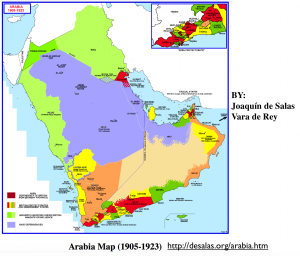 state came under British “protection,” as did the island of Socotra in 1886. (The geographical extent of the Mahri Sultanate is difficult to determine. Curiously, the detailed political map of Joaquín de Salas Vara de Rey of the Arabian Peninsula in the early 20th century shows the core area of Oman’s Dhofar governorate, Salalah and its hinterlands, as having belonged to it. If that was indeed the case, it is unclear how this vital area became part of Oman. The formal boundary between Oman and Yemen was only established in 1992.) 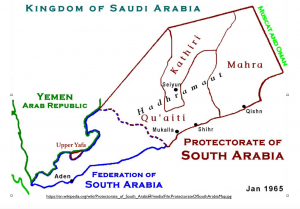 In any event, as Britain prepared to depart from its Arabian imperial realm in the early 1960s, it reorganized the local political geography. In 1962, 15 small protectorates were merged with the crown colony of Aden to form the Federation of South Arabia, still under British authority. The larger protectorates located further to the east, including the Mahri Sultanate, rejected membership in this federation and were therefore grouped together as the Protectorate of South Arabia.

Meanwhile, opposition to British rule mounted, encouraged by both Yemen and Egypt and underwritten by socialist and Arab nationalist sentiments. The Egyptian-supported, Marxist National Liberation Front (NLF) began to fight the British military in 1963, resulting in the so-called Aden Emergency. Unlike Oman’s Dhofar Rebellion of the same period, British forces did not prevail. Exhausted, the government of Harold Wilson made a hasty agreement with the NLF and withdrew from the region in 1967. Almost immediately, the NLF took control of both the Federation and the Protectorate of South Arabia, which it merged together as the People’s Republic of South Yemen. Needless to say, the local sultanates were abolished. Britain’s abandonment of its “protected” states in the region to communist forces was seen by many as an act of betrayal. A recent thread in Monarchy Forum, a discussion board dedicated to the perpetuation of monarchical rule, frames it as nothing less than a “monstrous betrayal.”

Some voices are now calling for a return of the sultanates of southern and eastern Yemen, either as independent states or, more commonly, as parts of a more finely divided federal state. Such sentiments seem to be particularly pronounced in Al Mahrah and Socotra. Shadiah Abdullah Al Jabry, in a June 2014 article in The National World, reports that:

Slogans such as “We reject exclusion and marginalisation” and “A separate Socotra and Al Mahra region is the future and dignity” were everywhere. Also ubiquitous were the flags of the former Mahra Sultanate of Qishn and Socotra, which was abolished in 1967 after the British occupation. …

Sheikh Al Afrar denied he had any hidden agenda to restore his dominion of the former sultanate and said he had no plans to run for political office. As to why he wants the two provinces [Socotra and Al Mahra] to be autonomous under one regional authority, he said it was because they shared a common language, culture and history that can be traced back 700 years.

“My intention is not to claim territory or even independence from the central government,” he said. “Our primary objective is to achieve the aspirations and the hopes of the people of Socotra and Al Mahra and their right to have a separate region within the federation away from dependency, exclusion and marginalisation.” …

Sheikh Al Afrar also said that the demands of the people of Socotra and Al Mahra should not be ignored or denied and called for a popular referendum to be held. He said he was in favour of the federal system as an alternative to the unitary system, which, during the past few decades, has proved to be an utter failure in creating a successful country, as per his analysis. “Now is the time to give the federal system an opportunity to make a comprehensive development framework in all the regions of Yemen,” he said.

A post in the Monarchy Forum mentioned above claims that some local people want more than regional autonomy, as a “movement supporting an independent Mahra and Socotra sultanate is in evidence.” Unfortunately, the links provided are either dead or refer to articles in Arabic, which are inaccessible to me.