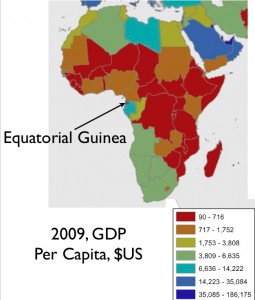 On February 2, 2012, the Russian newspaper Pravda ran a headline reading, ”Africa’s Richest Nation Ready For War.”  The country in question is the small, oil-rich state of Equatorial Guinea, noted for its rampant corruption and for the fact that its oil wealth has brought few benefits to its largely impoverished population. The county’s social ills have not, however, prevented it from engaging in a major military build-up. As Pravda notes, “The fleet of the 600,000-strong country will be larger than that of 160 million-strong Nigeria. Is Africa preparing for a major war?”

Equatorial Guinea’s military procurement program is highly global. It newest frigate was built in Bulgaria with Ukrainian oversight. Israel, Brazil, and South Korea have also provided ships. The country’s air force has been modernized by major purchases from Russia, and both Russia and China have been supplying equipment for its army.