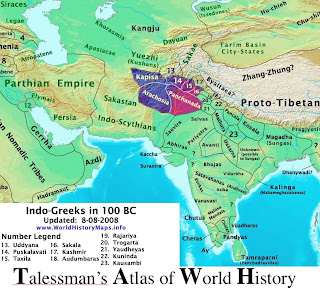 As we saw yesterday, a group of people seeking to develop the language and culture of the Hindkowan people of northern Pakistan call their organization the Gandharan Hindko Board. Although Gandhara disappeared as a kingdom and a culture over a thousand years ago, the term is widely used in the region by such groups as the Gandhara Union of Journalists. To its partisans, “Gandhara” connotes deep cultural continuity, intellectual sophistication, and an ecumenical approach to culture and religion. By selecting the term Gandhara, Hindkowan activists are distancing themselves not only from Pashtun provincialism, but also from radical Islamism. To the Taliban, Gandhara implies an ancient Buddhist realm of idolatry, the remnants of which should be destroyed. 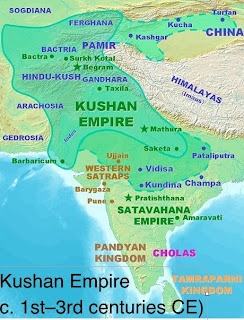 The ancient kingdom of Gandhara ruled much of what is now northern Pakistan, its base of power centered in the region stretching from the Vale of Peshawar to the vicinity of Islamabad. During its heyday, 400 BCE to 500 CE, it was noted for its cosmopolitanism, artistic synthesis, and religious developments. Gandhara was one of the core areas of India’s Maurya Empire in the fourth century BCE. When the empire weakened around 180 BCE, Greeks from a kingdom established by one of Alexander’s successors in Bactria (Northern Afghanistan) invaded and established several Greco-Indian states. Greek aesthetic ideas and sculptural techniques fused with those of northern India, producing innovative and abundant art. Greek rule yielded to that of the Kushans, nomadic invaders from Central Asia who arrived roughly 2000 years ago. Kushan rule resulted in another round of cultural synthesis, generating the Gandharan “golden age.” As Central Asians, the Kushans were key players in the profitable commerce of the silk roads. Gandhara became a crucial node in the development and dissemination of Mahayana Buddhism, sending missionaries northward into Central Asia, thence to China and beyond. The Swat Valley, a northern extension of Gandhara, also seems to have played a key role in the development of Vajrayana (or Tantric) Buddhism.

Two of Gandhara’s early scholars deserve special mention. Pāṇini (4th century BCE) is the founder of scientific linguistics, noted for his 3,959 rules of Sanskrit morphology. His painstaking and systematic analytical approach bears close resemblance to certain forms of modern computer programming languages. Pāṇini’s near contemporary, Chānakya (c. 350-283 BCE), was one of the world’s first systematic political thinkers; his Arthaśāstra isoften compared to Machiavelli’s The Prince. Not just a theorist, Chānakya was a political practitioner of the first order. He may have orchestrated Chandragupta’s union of Gandhara with the urban core of the Ganges Valley and his subsequent conquests across northern India, formative events in the birth of the Maurya Empire.

The government of Pakistan views the remains of ancient Gandhara as a national cultural resource, one that could potentially promote inter-faith understanding – as well as income-generating tourism. In March 2010, Pakistan’s President Asif Ali Zardari assured a ten-member delegation from the World Fellowship of Buddhists (WFB) that his government was “keen to preserve and develop the ancient cultural heritage of Gandhara.” Zardari also thanked the WFB for promoting the “Gandhara heritage of Pakistan.” The head monk, Phallop Thaiarry of Thailand, expressed deep admiration for the ruins, concluding that “Pakistan can be a great Buddhist pilgrimage destination in the world.”

The promotion of Gandhara by Zardari and the Hindkowan cultural leaders is anathema to the Taliban and other radical Islamist elements active in the region. In Pakistan’s Swat Valley and in Afghanistan, Taliban agents destroyed Buddhist art and ruins, most infamously by dynamiting massive statues of the Buddha in Bamyan in 2001. Considering the Taliban’s penchant for violence, Buddhist religious tourism is unlikely to contribute much to Pakistan’s economy in the near future.