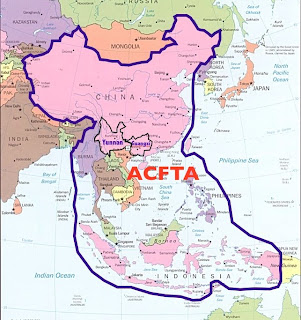 January 1, 2010, saw the emergence of the world’s largest free trade area in terms of population, linking China with the ten countries belonging to the Association of Southeast Asian Nations (ASEAN). Disagreements remain as to what to call the new organization. In the English-language press, the favored term is ACFTA, the ASEAN–China Free Trade Area; Chinese newspapers more often call it CAFTA, the China–ASEAN Free Trade Area. “CAFTA” is a potentially misleading term, as the same acronym was used for the Central American Free Trade Agreement. Officially, however, that CAFTA became CAFTA-DR in 2004, when the Dominican Republic joined the club.

Controversies that go deeper than nomenclature riddle the new free trade pact. On January 7, thousands of workers took to the streets of the Indonesian city of Bandung to demand a delay in implementation of the agreement. The protestors, the JakartaPost reported, “expressed fears that once the FTA came into effect it would trigger mass layoffs, as well as Indonesian products’ inability to compete on international markets.” Similar concerns have been expressed in Thailand and in other Southeast Asian countries concerned about competing with the Chinese manufacturing juggernaut. In the Philippines, highland vegetable farmers are worried about cheap Chinese carrots and cabbages. In response to such concerns, China announced on January 22 that it was willing to work with ASEAN countries to make adjustments to the agreement.

Enthusiasm for ACFTA, on the other hand, runs high in the relatively poor regions along the border between southern China and mainland Southeast Asia. The governments of Laos and the Guangxi Zhuang Autonomous Region of China have been holding high-level talks to figure out how to take advantage of the free trade area. On January 7, direct flights began between Laos and Guangxi’s capital, Nanning. Officials in China’s Yunnan province are equally excited about the new economic possibilities. As the website GoKunming reports, the region will soon see “a vast network of highways and rail which will provide cities in Yunnan with cheap overland access to markets in Myanmar, Laos, Vietnam, Cambodia, Thailand, Malaysia and Singapore.” The article goes on to exclaim that, “difficult as it may be to imagine, Yunnan’s days as an economic and political backwater are officially over.”

Economic ties between southern China and the rugged lands of northern Southeast Asia have already been surging in recent years. Such developments have both positive and negative consequences, as was briefly explored in an earlier post on Burma’s United Wa State. Environmentally, the biggest issue is the massive dam-building projects undertaken on the Mekong, Salween, and other rivers that flow across the international boundary. But that is a subject for a later post.