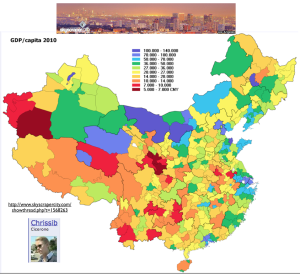 An impressive map of China’s per capita GDP by prefecture, reposted here, appeared in late 2012 on the website Skyscraper City, posted by user “Chrissib” Cicerone.  According to the map, the two poorest parts of China are in southern Gansu province, an area demographically dominated by Han Chinese, and in southwestern Xinjiang, an area demographically dominated by Uighurs, a Turkic-speaking, Sunni Muslim people.

As noted in the previous GeoNote, the level of economic development in Xinjiang as a whole is slightly lower than the Chinese average, as measured by per capita GDP. But as Chrissib’s map shows, Xinjiang shows striking disparities in its own regional economic patterns. As a comparison of a detail of his map with a Wikipedia map of ethnicity in Xinjiang shows, areas dominated by Han Chinese have much higher levels of economic productivity than those dominated by Uighurs. Also essential to note is the fact that the Han Chinese domination of eastern Xinjiang largely stems from relatively recent immigration to the region, a process much resented by Uighur activists. 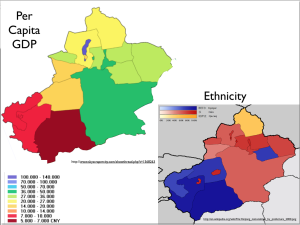 China is currently seeking to enhance the economic development of Xinjiang, along with the country’s other western regions. But as Preeti Bhattacharji explains in a recent article published by the Council on Foreign Relations, the project faces a number of ethnic issues:

Xinjiang’s wealth hinges on its vast mineral and oil deposits. In the early 1990s, Beijing decided to spur Xinjiang’s growth by creating special economic zones, subsidizing local cotton farmers, and overhauling its tax system. In August 1991, the Xinjiang government launched the Tarim Basin Project to increase agricultural output. During this period, Beijing invested in the region’s infrastructure, building massive projects like the Tarim Desert Highway and a rail link to western Xinjiang. In a 2000 article for the China Journal, Nicholas Bequelin of Human Rights Watch said these projects were designed to literally “bind Xinjiang more closely to the rest of the PRC.”

Ethnic tension is fanned by economic disparity: not only are the Han-dominated areas more productive, but the Han individuals tend to be wealthier than the Uighurs in Xinjiang. Some experts say the wage gap is the result of discriminatory hiring practices. The CECC reported in 2006 that the XPCC [Xinjiang Production and Construction Corps] reserved approximately 800 of 840 civil servant job openings for Han. This policy was changed in 2011, however, and the XPCC “left almost all positions unreserved by ethnicity.” But the 2011 CECC says both government and private sectors had discriminatory hiring practices against the Uighurs and also denied them religious rights such as observing Ramadan and allowing Muslim men to wear beards and women to wear veils.