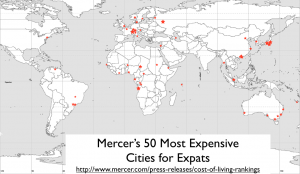 Mercer’s annual worldwide cost of living survey is widely used by corporations to help determine compensation levels for executives posted abroad. I have mapped the fifty most expensive cities according to the 2012 Mercer Report. The size of the stars indicates the level of expense: as such, the five most expensive cities (Tokyo, Luanda, Osaka, Moscow, and Geneva) are depicted with the largest symbols. The Mercer survey, it should be noted, uses New York City as its benchmark, and relies heavily on currency exchange figures.

The patterns on the map are intriguing, as they bear little resemblance to those found on maps of general economic development. Expensive cities are found in the some of the world’s richest countries (Switzerland, Japan), some of the poorest  countries (Chad, Central African Republic), and in a number of mid-income countries as well (Brazil, Russia). As far as the general pattern is concerned, the world’s most expensive cities—as reckoned by Mercer—are found in Europe, greater west Africa, maritime eastern Asia, and Australia.

The paucity of such cities in North America is notable, with only New York making the list. Considering its exorbitant cost of housing, San Francisco places surprisingly low.

Forthcoming GeoNote will examine inexpensive cities on the Mercer list, as well as other methods of measuring the cost of living in cities across the world.