The portrayal of other countries in the humorous map “How Typical (Central) Canadians See the Rest of the World” contrasts sharply with the global vision found in its counterpart about Texans. Though it lacks geographical precision, the map about Central Canadians’ attitudes, found on the Canadian creator’s blog, effusively praises different countries for their natural beauty, the friendliness of their people, and their historical significance. Meanwhile, the map from the perspective of Texans, originally from a British website but also found elsewhere, has vastly greater geographical distortions and angrily and ignorantly belittles most of the places that it includes. 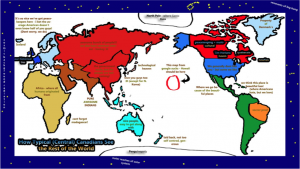 The first map attempts to show the common worldview of the residents of Ontario and Quebec in Central Canada. These two provinces account for much of the Canadian population and tend to be more politically left-leaning than other parts of the country. The map’s creator makes a clear effort to distinguish the views of Central Canadians from those of Americans, labeling Cuba with “where Americans hate, but we love,” and labeling Europe with “It’s so nice we’ve got peace-keepers here – I bet the average American doesn’t even know half of you guys!” However, like farcical maps from the American perspective, this map crudely lumps together certain countries that have little in common. For example, Australia, New Zealand, Papua New Guinea, and insular Southeast Asia are grouped together as a single region, as are India, Southwest Asia, and the Caucasus. 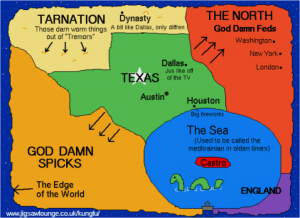 The map from the perspective of Texas presents a much more insular and cranky view of the world. Texas occupies the center of a large, flat landmass apparently floating in outer space. The creator has labeled Mexico with an insulting slur and derisively named a mass that resembles Oklahoma as “Tarnation.” “The North” erroneously includes London as part of the “Feds,” and England has been misplaced below the Gulf of Mexico, labeled in the map as “The Sea.” These features, along with the note over the water, “Used to be called the meditrainian in olden times,” suggests that Texans hold geographical assumptions that are so ignorant and backward that they resemble those of the ancient Greek historian Herodotus, who had only a rough understanding of the world beyond the Mediterranean.

Canadians and Texans are commonly thought of as standing on opposite ends of the spectrum of global visions in North America.