Although GeoCurrents does not normally accept guest posts, I was so taken by this piece by Seth Jackson that I decided to make an exception. One of the main themes of this website is geopolitical complexity, and here we have it in spades!

The Crown Dependencies: What Exactly Are They? 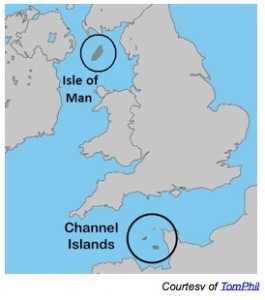 We often hear that the Isle of Man and the Channel Islands of Jersey and Guernsey are not part of the United Kingdom, but are instead classified as Crown Dependencies.  The question then arises about the possession of their sovereignty.  If the U.K. doesn’t maintain sovereignty over the islands, who then does?  Is the Crown a separate entity from the U.K.?  If the Crown Dependencies are outside the territorial scope of the U.K., then why are they not considered to be independent countries in their own right?

Sovereignty over the Crown Dependencies and the United Kingdom are vested in the Crown.  Indeed, the reigning monarch is the Sovereign.  All powers of sovereignty symbolically emanate from his or her person.  The Government of the United Kingdom is formed in his or her name, and likewise the autonomous governments of the Isle of Man and the Channel Islands operate and function in the name of the Sovereign.

As a result, the Sovereign, currently Elizabeth II, is officially known by different titles in each jurisdiction, such as Queen of the United Kingdom, Queen of Canada, and Queen of Tuvalu.  In the Crown Dependencies, her titles are more unusual.  She is the Lord of Mann while in or acting on behalf of the Isle of Man, and in the Channel Islands she is known as the Duke of Normandy.  She is perhaps the only woman to hold the titles of Lord and Duke, as opposed to the female equivalents of Lady and Duchess.

Is there one crown that represents all the Commonwealth realms and its dependencies, or does each realm and dependency have its own separate, unique crown?  In other words, is Elizabeth II queen of 16 realms, or is she simultaneously 16 different queens?  The Statute of Westminster 1931 granted each realm its own crown that is a separate legal personality from that of any other crown.  However, does this mean the “Crown in right of the Isle of Man” is a separate legal entity from that of the “Crown in right of the United Kingdom”?  It seems that the answer is “no”: the Isle of Man, Jersey, and Guernsey are dependent upon the British Crown, or the “Crown in the right of the United Kingdom”, but this in no way implies that they are part of the United Kingdom.

This seems to suggest that the independent country of the United Kingdom is really only a subset of something larger – the British Crown.  The Crown contains within it the sovereignty of four national governments: the United Kingdom, the Isle of Man, Jersey, and Guernsey.  In addition, the U.K. itself consists of four non-sovereign yet increasingly autonomous countries (England, Scotland, Wales, and Northern Ireland), as well as several overseas territories.  Perhaps the relationships of the Crown Dependencies to the United Kingdom most closely resemble those of states in free association, such as the relationship of the Cook Islands and Niue to New Zealand.

How does one interpret the sovereignty of the Crown Dependencies and their place within the British Crown? The question is not easily answered. Although conventional opinion regards the global geopolitical community as a straightforward assemblage of mutual recognized sovereign states, the actual situation is vastly more complicated.

1. There are some who claim Orkney and Shetland are Crown Dependencies, or more specifically Crown Trust Dependencies, and are not legally part of Scotland or the United Kingdom, owing to their history of being pawned by King Christian I of Denmark to King James III of Scotland in 1468/9, as security against the dowry in the marriage of Christian’s daughter to James III.  The assertion is that this act of pawning did not transfer sovereignty, as the pawn can technically be redeemed (although previous attempts to do so have been unsuccessful), and as such, the islands have remained a trust asset of the Crown ever since.  The islands were openly recognized as Scottish Crown Dependencies prior to the Acts of Union 1707, when the independent Kingdoms of Scotland and England joined together to form the Kingdom of Great Britain.  Today, there is a movement for greater autonomy for the islands, with the small Shetland island of Forvik going so far as to declare itself a Crown Dependency in 2008, and an independent country in 2011.

2. The Sovereign is also the lord paramount of all soil in the United Kingdom and the Crown Dependencies.  The Crown assumes title through the process of escheatment of any lands that are declared to have no other owner, such as in cases of bankruptcy or the dissolution of companies.

3. However, since Canada and Australia are both federations, each province and state has a direct relationship with the Crown as well.

5. Although, Queen Victoria was styled as the Lady of Mann during her reign.

6. The Queen is also referred to as the Duke of Lancaster during formal settings in Lancashire, England or within her duties pertaining to the Duchy of Lancaster.

7. The United Kingdom, however, is responsible for the defense and foreign relations of the Crown Dependencies as matter of tradition and convention.  Each dependency pays the U.K. an annual fee for these services