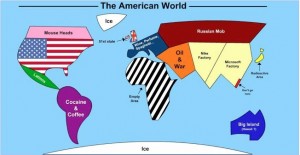 On the first map, note that the distorted landmasses are very roughly divided into world regions. According to the creator, Americans tend to see Europe as cultivated and soft, South Asia and East Asia as mostly industrial, Canada as woodsy and provincial, Southwest Asia as oil rich and war-torn, and Africa (which has black and white stripes reminiscent of those of zebras) as lacking any interest. Australia’s labeling as “Big Island (Hawaii ?)” is probably a jab at Americans’ general geographical ignorance. Most unusual is the red strip labeled “Don’t go here.” Could it be North Korea? If so, it is far too south. 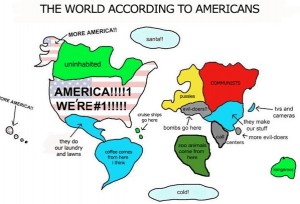 “The World According to Americans” map has many similarities with “The American World.” As on the previous map, the American flag is superimposed on the United States and is coupled with a noisily patriotic exclamation, “AMERICA!!!1 WE’RE #1!!!!!” Also similar is the disparaging tag placed on Europe, the reference to Asia as an industrial zone, the view of Southwest Asia as violent and war-torn, and the labeling of Canada as “uninhabited.” Africa, which is floating free of Eurasia, is insultingly depicted as a land of “zoo animals.” Besides the anachronistic labeling of the former lands of the Soviet Union as “communists,” the circular blob representing Southeast Asia is oddly labeled “more evil doers”. While the cartographer may be referring to Muslim fundamentalist organizations such as Jemaah Islamiyya in Indonesia, it is unlikely that the average America—whose view this map supposedly represents— would have any knowledge of such groups.