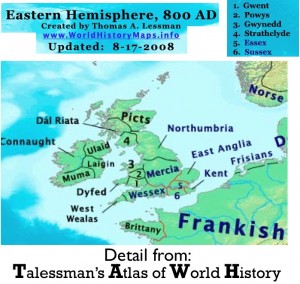 The best on-line source of maps of pre-modern world history is Thomas Lessman’s Talessman’s Atlas of World History, hands-down. Lessman’s maps are well designed, aesthetically pleasing, and comprehensive. I have posted a magnified detail of his map of the world in the year 800 CE, depicting the British Isles. I do this in part to show the level of specificity found in his maps—although if one wants to see real complexity, Lessman’s depiction of the same area in the year 450 CE would have been a better choice, as it maps twenty-one separate polities. I also selected this area to illustrate a forthcoming GeoNote on place-names in Scotland, focused on what such names can tell us about the ethnic groups of the past and their languages.

The map here depicts the British Isles and environs shortly before the formation of the Kingdom of Scotland, or Alba, which is usually dated to 843 CE. Note that in the year 800 the area now known as Scotland was occupied by four distinct groups. In the west, the kingdom (or chiefdom) of Dal Riata was the territory of the Scots, relatively recent immigrants from northern Ireland who spoke a Goidelic Celtic language closely related to modern Irish (Gaeilge) and the ancestral tongue of Scottish Gaelic. Strathclyde in the southwest was occupied by “Britons” (the northern Welsh), who spoke a Brythonic Celtic language, closely related to Breton, Cornish, and Welsh. (For a fascinating account of this kingdom, see the chapter on Alt Clud in Norman Davies recent book, Vanished Kingdoms). The Picts of the north and east may also have spoken a Brythonic Celtic language, but the Pictish tongue remains controversial; some scholars are not sure that it was Celtic, and a few have even suggested that it was not Indo-European. In the southeast, the Kingdom of Northumbria, which was based in what is now northern England, was dominated by the Angles, a Germanic people speaking a variety of Old English. Not shown on the map were the Viking (Norse) incursions, which were beginning at roughly this time. The Vikings were to raid widely across the region and settle extensively in the north and west; the very formation of Scotland, which ultimately united Scots, Picts, Britons, and Angles, was to a significant extent a response to the Viking threat. 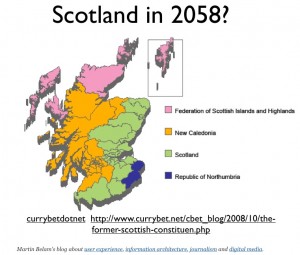 The historical divisions of the northern half of Britain are again in play as the people of Scotland contemplate independence. As has been noted in a GeoCurrents post, the desire for independence is geographically structured, and it has been suggested that certain parts of Scotland might try to opt out of the potential future country. This issue has produced some imaginative cartography. Reproduced here is Martin Belam’s fantasy depiction of a divided Scotland in the year 2058, twelve years after an imagined Scottish Civil War, which in turn followed the envisaged separation of Scotland from the United Kingdom in the 2020s.

Belam’s article is actually something of a parable about names of countries, and as such pertains to the dispute between Greece and Macedonia over the name of the latter country (Greece rejects “Macedonia,” a term that it claims as its own, and instead insists that its northern neighbor be called the “Former Yugoslav Republic of Macedonia,” or FYROM). The comments on Belam’s article are also revealing in regard to lingering tensions and historical arguments between the Scottish and the English peoples.