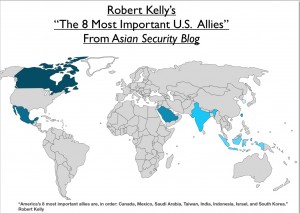 A recent post in Robert Kelly’s Asian Security Blog that lists “America’s 8 most important allies … in order” (see map) has been getting a lot of attention. Kelly’s response to his critics has not done much to bolster his position. Consider, for example, what he has to say about Indonesia (here and here), which he regards as the sixth most significant ally of the U.S.:

The very fact the Indonesia is a moderate Muslim state is why no one cares about it, but that is a good thing! I guarantee you that if Indonesia had nasty salafists running around like in the ME, we’d all be talking about it… But the real story of American commitment in the Muslim world should be Indonesia. Not only is it valuable as a bulwark against Islamic extremism where the majority of the world’s Muslims live (SE Asia), it’s also a valuable hedge against China, and it’s the fourth largest country on earth.

Kelly’s other observations about Indonesia are not enlightening.  Whether the country qualifiers as a “moderate Muslim state” is an open question. It is true, as a recent Jakarta Post article notes, that Indonesia “has not seen a major terrorist attack since the bombing of the JW Marriott and Ritz-Carlton hotels in 2009 as many top terrorist leaders and bombmakers were either killed or captured in police raids.” Yet as this statement also makes clear, Indonesia has produced a number of “terrorist leaders,” the trials of whom continue to this day. And while Kelly claims that the country has “no nasty salafists running around,” in actuality the Salafiyyah movement is well represented in Indonesia. But then again, most Indonesian Salafists might not merit the term “nasty”; a 2004 report, for example, found that “Salafism [in Indonesia] may be more of a barrier to the expansion of jihadist activities than a facilitator.” But regardless of terrorist activities or Salafist orientations, it is difficult to ignore the strength of anti-liberal attitudes in Indonesia. According to a recent article in The Economist:

MAY was a cruel month for Indonesians trying to do nothing more than worship their god. During an Ascension Day service on May 17th (and again on May 20th), about 100 Protestants were attacked by a Muslim mob at their church in Bekasi on the outskirts of the capital, Jakarta. The mob hurled stones, bags of urine and death threats at the congregation. The church was still only half-built when it was attacked; the pastor has been waiting more than five years for permission from the local district administration to complete it. Since May 2nd local government officials in the ultra-conservative Muslim province of Aceh, in northern Sumatra, have closed at least 16 Christian churches, citing lack of permits.

The Ahmadiyya Muslim community is perhaps the most persecuted. Violent attacks against this group, whose beliefs are considered heretical by many conservative Muslims, have increased significantly. Last year I met victims of one of the worst outbreaks of violence, an attack on Ahmadis in Cikeusik on Feb. 6, 2011, which left three people dead. 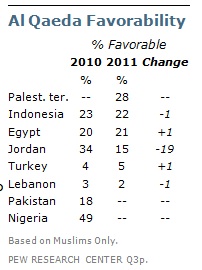 Perhaps the best evidence for the strength of non-moderate Islam in Indonesia comes from the Pew Global Attitudes project. As the tables posted here show, support for Al Qaeda and Osama bin Laden is stronger in Indonesia than it is in Egypt, Jordan, Turkey, Lebanon, and even, astoundingly, Pakistan. 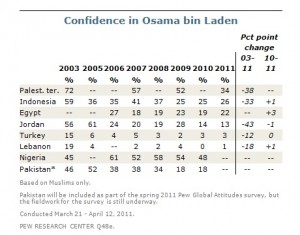 Kelly’s notion that Indonesia can serve as a “hedge against China” also seems to be exaggerated. Unlike Vietnam, Malaysia, and the Philippines, Indonesia has no territorial disputes with China, and hence enjoys reasonably cordial relations with the country. As Radio Australia notes, Jakarta’s ambassador to Beijing recently  said that “the Indonesia-China relationship had moved from one of initial suspicion to that of cooperation for the common good, beginning with trade.” Even Kelly’s assertion that Indonesia is “the fourth largest country on earth” is slightly off base. Indonesia is indeed the fourth most populous sovereign state in the world, but the term “country” generally emphasizes territorial extent over population. In this sense, Indonesia is actually the world’s fourteenth largest country, coming in just below Mexico.