In a recent Foreign Policy article, Robert Kaplan argues that Pakistan’s problems—and its destiny—are rooted in its physical landscape: “Pakistan’s present and future, for better or worse, are still best understood through its geography.” Kaplan’s article is important and insightful in many respects, and I would urge all interested parties to read it carefully. But as a geographer, I am wary of arguments that too strongly link historical processes and political developments to geographical patterns: geographers once argued that the physical landscape determined just about everything, an overweening claim that crippled the discipline. Careful securitization of Kaplan’s claims thus seems in order.

Kaplan’s geographical arguments are much more sophisticated than those of the crude geographical determinism of yesteryear. He does not link pervasive insecurity and violence to rugged topography, a common and simplistic maneuver, and he explicitly rejects the commonplace thesis that Pakistan is an artificially constructed state with no geographical rationale that is therefore bound to flounder. Instead he contends that the country does indeed have a specific geographical logic—one that shapes its politics and guides its development. That logic is founded on possession of the Indus Valley and (most of) the fertile plains of the Punjab, areas that, he claims, automatically tie in with the adjacent western uplands and hence to the vital trade routes of Central Asia and the Middle East. Polities based on this geographical space, he argues, were a staple feature of South Asian history: “This entire middle region — not quite the subcontinent, not quite Central Asia — was more than a frontier zone or a bold line on a map: It was a fluid cultural organism and the center of many civilizations in their own right.” Such a territorial foundation, he further contends, became all the more important with the advent of Islam in the subcontinent: “Pakistan is the very geographical and national embodiment of all the Muslim invasions that have swept down into India throughout its history.”

Kaplan contrasts this naturally constituted Indus-based state with another geographically determined locus of state formation further to the east: “the Indian subcontinent has two principal geographical regions: the Indus Valley with its tributaries, and the Ganges Valley with its tributaries.” The key to the current geopolitical tussle for Afghanistan, he contends, is the unprecedented attempt by a Ganges-based state (India) to leapfrog an Indus-based state (Pakistan) by gaining influence over South Asia’s crucial northwestern borderlands (Afghanistan): “Today’s political geography is historically unique, however: an Indus Valley state, Pakistan, and a powerful Ganges Valley state, India, both fighting for control of an independent and semi-chaotic Central Asian near abroad — Afghanistan.” 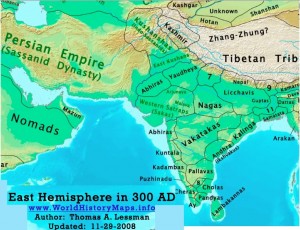 Although Kapan’s reasoning is subtle and his marshalling of historical evidence impressive, his general scheme is a bit too neat and tidy. To begin with, reducing India to the Ganges Basin is simplistic—and sure to generate offense in the rest of the country. The Ganges Valley can be viewed as India’s most important cultural-historical core zone, but other cores, such as the plains of Tamil Nadu in the extreme south, have been vitally important for millennia.  In today’s India, moreover, the Ganges Basin is generally regarded as the poorest and most backward part of the country, with the centers of dynamism mostly located well to the south. 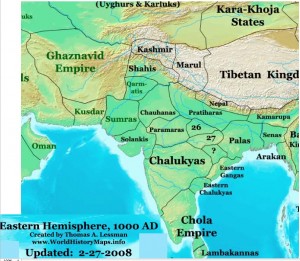 Historically as well, it is questionable to link the physical-geographical substrate to the generation (and regeneration) of particular, territorially bounded states. At one level, Kaplan recognizes the fluctuating nature of pre-modern polities, arguing that the “past belonged to a world not of fixed borders, but rather of perpetually moving spheres of control as determined by the movements of armies.” Yet at the same time, he repeatedly refers to Indus-based and Ganges-based states as forming the geo-political core zones of South Asia. In actuality, many historical kingdoms ruled over areas not fixed by the region’s riverine topography.  Consider, for example, the situations circa 300 CE, 1000 CE, and 1500 CE, as represented in Thomas Lessman’s superb political-historical atlas. Note in these maps the division of the Indus Valley into competing states, as well as the significance of Indian kingdoms located outside of the Indo-Ganges lowlands. If one picks particular historical episodes, one can indeed make it seem as if there is a natural connection between particular territories and powerful states, but if one picks other periods, different patterns are revealed. Geography, in other words, is not exactly destiny. 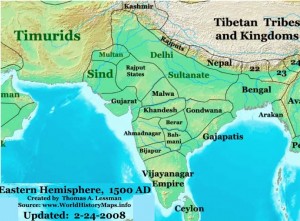 Finally, Kaplan’s very subtitle is doubly problematic: “Why geography — unfortunately — is destiny for South Asia’s troubled heartland.” How Pakistan could possibly be considered South Asia’s “heartland” is beyond my understanding.