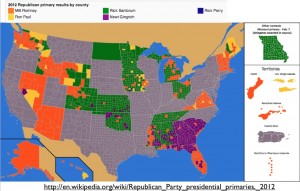 Yesterday’s GeoNote examined the recent Republican presidential primary in Alabama, stressing the divergent results in the state’s various regions. In both Alabama and neighboring Mississippi, each of the top three candidates took a significant number of counties. As the first map posted today shows, this has been a somewhat unusual pattern in this election season; in most states that have selected delegates to the Republican convention, one or two candidates took almost all counties.

This map also reveals the strength of the libertarian candidate Ron Paul in certain parts of the country. Paul has done quite well in rural countries in the west and far northeast. Although he narrowly lost Maine to Mitt Romney, Paul took a majority of Maine’s counties, several by more than fifty per cent of the vote.  Western Washington and northern Idaho have also given strong support to the libertarian challenger. Paul’s relatively strong showing in Virginia, on the other hand, stemmed largely from the fact that only he and Romney were on the ballot. His support in eastern Iowa is more difficult to explain.