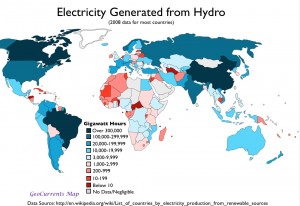 As yesterday’s GeoNote pointed out, most countries derive relatively little of their electrical power from renewable sources, and those that do focus mostly on hydropower. Today’s maps, derived from the same somewhat out-of-date Wikipedia data set, shows the total amount of electricity generated in most countries from the five main renewable sources. The data are admittedly somewhat misleading: by showing total production, they favor large, populous countries.

Large countries dominate the hydro ranks, with Canada and Brazil trailing China for top position, and the U.S., Russia, and India falling not too far behind. South America in general produces large amounts of hydropower. Africa’s figures are much lower, although much of the region does have potential for significant expansion. Intriguingly, the Central African Republic comes in last place in the Wiki hydro chart, yet it its meager hydro facilities nonetheless produce over 80 percent of its electricity supply. 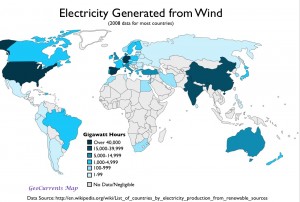 In regard to wind power, the U.S. occupies the top slot, followed by Germany and Spain. Europe overall ranks high in this regard, although China and India are also major producers. Much of the world, however, generates little if any electricity from the wind. Production of geothermal power is much more spotty. The U.S. again leads, with other top producers located along the “Pacific Ring of Fire,” a zone of pronounced volcanism. The Philippines occupies second position, followed by Indonesia. Iceland comes in sixth; although noted for its geothermal power, much of it is used for heating rather than the generation of electricity. Electricity derived from biomass correlates with agriculture, as top commercial-farming countries tend to have high production figures. The U.S. leads here, followed by Germany and Brazil. Germany’s elevated position is notable: in general, Germany encourages renewable energy more than other countries. In regard to solar power, for example, Germany occupies the top slot, even though its solar potential is quite low, owing to its northern location and frequent cloud coverage. As the map shows, few countries produce more than negligible amounts of electricity from solar power. 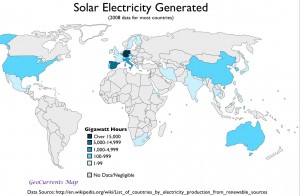 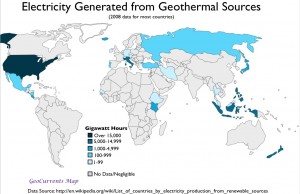 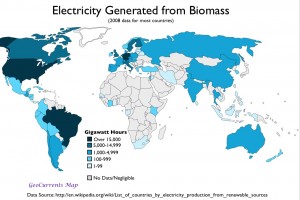