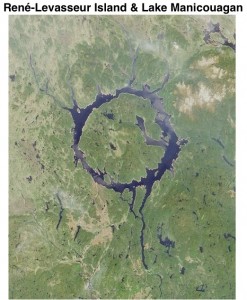 The Wikipedia’s list of the world’s largest islands in lake has some intriguing features. Four of the top seven positions are occupied by islands in North America’s Great Lakes: Manitoulin Island in Lake Huron (or Lake Michigan-Huron, which is actually a single lake), Isle Royale in Lake Superior, St. Joseph Island in Lake Huron, and Drummond Island, also in Lake Huron.

While Manitoulin is clearly the world’s largest lake island, the second position entails some ambiguity. Until the turn of the millennium, Vozrozhdeniya Island in the Aral Sea was the second largest island in a lake, but the shrinkage of the Aral subsequently turned it into a peninsula then caused to disappear completely as a geographical feature. Currently René-Levasseur Island in Quebec’s Lake Manicouagan occupies the second slot. Lake Manicouagan, however, is an artificial reservoir, created by the damming of the Manicouagan River in the 1960s. Unique among large lake islands, René-Levasseur is larger than the lake that surrounds it; the island covers 2,020 km2 (780 sq mi), whereas the area of the lake is 1,942 km2 (750 sq mi).

Together, René-Levasseur Island and Lake Manicouagan make an interesting geographical feature, easily discernable from space. Due to the near circularity of both the lake and the island, they are sometimes called the “eye of Quebec.” Such circularity derives from the feature’s origin as an asteroid impact crater some 214 million years ago. The crater was originally around 100 kilometers wide, but erosion and sedimentation gradually reduced the depression to a width of around 72 kilometers. Until the damming of the Manicouagan River, two crescent-shaped lakes occupied the periphery of the depression. Once the dam was completed, the two lakes merged together to form what is now Manicouagan reservoir.