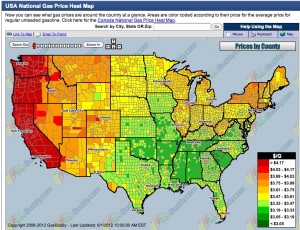 Regional differences in the price of gasoline in the United States are often discussed, with many observers noting that higher prices tend to be found in left-leaning states that have more stringent regulations and higher taxes.  Maps of gasoline price, such as those supplied by GasBuddy.com tend to bear out this generalization, although some exceptions are evident. Democratic-voting Minnesota, for example, has lower gasoline prices than Republican-voting Indiana. (GasBuddy also provides highly detailed local maps of gasoline prices, updated regularly.) 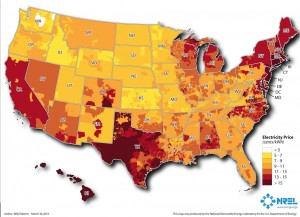 Less often discussed is the fact that electricity prices in the United States vary vastly more than do gasoline prices. Here, political correlations are weak to non-existent, while variation within some states is profound. Price differentials here are partly rooted in the source of electrical power.  Low prices in Washington state in the northwest, for example, reflect the cheap and renewable power generated by massive dams on the Columbia River.

Electricity price differences across Texas are especially notable, a topic that would merit further exploration.