Public Education and Ethnicity in Connecticut 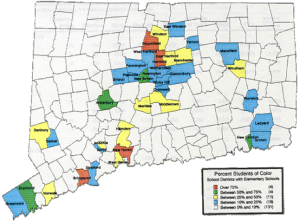 Connecticut has stark contrasts in prosperity and social development, including educational quality. The map showing the percentage of students of color in Connecticut school districts demonstrates that a handful of urban areas have high concentrations of people of color, while many of the school districts in the state have mostly white students. Unfortunately, it was impossible to locate the source of the map about students’ race and ethnicity, but the 2010 United States Census reflects many of its statistics. A comparison between this map and a recent map of the best performing school districts in Connecticut from NeighborhoodScout.com suggests that lower performing districts tend to have higher percentages of students of color. The issue of segregation in the state’s public schools came to the fore in the Connecticut Supreme Court case Sheff v. O’Neill. The case was decided in 1996 in favor of the plaintiff, who argued that the de facto inaccessibility of good public education to students of color amounted to a civil rights violation. 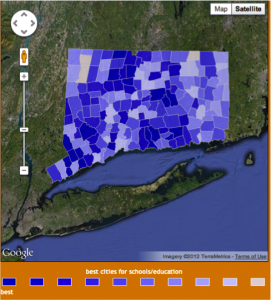 Note that students of color are concentrated in three heavily populated cities: Bridgeport, New Haven, and Hartford. Likewise, note that the cities of Waterbury, New London, New Britain, and Stamford, which is my hometown, have the next highest numbers of students of color—50% to 70% of enrolled students. Outside of these seven urban areas and the town school districts colored in yellow, orange, and blue, at most only 10% of students in enrolled in Connecticut public schools are non-white. Also, some of Connecticut’s highest performing public schools are in Darien, Weston, New Canaan, and Avon, which are indicated on the race and ethnicities map in grey; meanwhile, some of the state’s lowest performing public schools are in Bridgeport, New Haven, and Hartford. Relative wealth constitutes one large factor in school performance disparities. New Haven, Bridgeport, and Hartford are poorer than towns such as New Canaan, Darien, and Weston, which are located in Fairfield County, the county with the seventh highest per capita income in the United States. That said, in towns such as Union and Canaan, which are more rural and have lower median household incomes, students of color represent at most 10% of the enrolled students and scores on state standardized tests are lower. Since the quality of Connecticut’s school districts reflects to a great extent the property taxes and per capita income of its residents, the two Connecticut maps show a correlation between not only race and education but also between race and income.