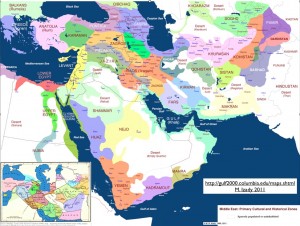 The fantastic map trove at Columbia University’s Gulf 2000 Project, generated by cartographer M. Izady, continues to expand. Many detailed maps of language, religion, ethnicity, and cultural-historical regions in the greater Middle East are found on the site.

Today’s GeoNote highlights Izady’s map of “Primary Cultural and Historical Zones.” This map makes an invaluable companion for historical sources covering the region. Regional terms, such as Khurasan, Hadramout, and Hijaz are often encountered in such works, but until now it has been impossible to find a single map that indicates their positions.

A few oddities are apparent. Note that the map includes two “Iraqs,” one in modern Iraq and the other in Iran. Although seldom used now, such terminology was once widespread, and I was quite confused when I first read of a Persian “Iraq.” (The etymology of the word is still debated.)

My one complaint about the map is the use of several non-local terms, such as “Piedmont” for part of Kurdistan and “Caspia” for the eastern Caucasus. The term “piedmont” derives from the Italian for “mountain foot,” and is used for several regions of the world situated near the base of a prominent mountain range. It is used here as substitute for indigenous terms meaning the same thing.