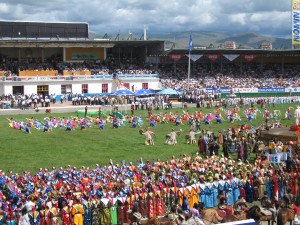 In anticipation of future posts exploring the geography of Olympic medals, this post will focus on the sporting fortunes of one country in particular—Mongolia. Mongolia tends to perform very well in on the basis of medals won weighed by population or GDP. In 2012, Mongolia earned two silver and two bronze medals, placing it third in total medals per dollar of GDP and tenth in total medals per capita. Since Mongolia’s first summer Olympics in 1964, all of the country’s medals have come from just four sports: wrestling, boxing, judo, and shooting.

The sporting scene in Mongolia has remained remarkably stable for hundreds of years. The traditional Three Manly Skills of Mongolia—horseback riding, archery, and wrestling—remain the country’s most popular sports to this day. The cultural niche filled in the U.S. by the Super Bowl in in Europe by the UEFA Champions League is in Mongolia filled by the three-day Naadam festival (picture at left from Wikipedia). Most Mongolian communities have their own Naadam festival, but the national festival in Ulaanbaatar always takes center stage. At the festival, contestants gather to showcase their horsemanship, test their skill with a bow, and grapple in the traditional Mongolian wrestling style known as Bökh. The aim of Bökh is quite simple: to knock one’s opponent to the ground (picture at left from). Though wrestling is always the most anticipated event, the trick horsemanship on offer at the festival is extremely popular and immensely impressive.

Champions, or “Titans”, as Bökh winners are known in Mongolia, tend to transition fairly easily to foreign wrestling venues. Many have gone on to have successful careers in Japanese Sumo-Wrestling while others become the Olympic medalists that catapult Mongolia to its lofty position in the per capita medal rankings. Mongolia’s high position thus isn’t much of a mystery when one considers that a country’s per capita success in a sport will depend heavily on the share of its youth who are exposed to that sport. What is rather strange, then, is Mongolia’s inability to compete internationally in horse-based events.

The warriors of Genghis Khan practically lived on their horses. They could ride for days, gaining sustenance by cutting the veins of their cold-numbed horses and drinking as much blood as they could without physically compromising their mounts. In battle, they shot arrows with deadly accuracy no matter which way their horses happened to be running. The Mongols of today may not drink much horse blood, but many are still excellent riders, and riding maintains its place as a central experience in Mongolian life, especially outside of Ulaanbaatar. Horses in Mongolia outnumber people, and the winners of wrestling competitions often receive horses as a prize. According to Wikipedia, a well-known Mongolian military figure picked up coins from the ground while riding a horse at full speed. It seems that Mongolia’s relative failure in equestrian Olympic sports as well as non-Olympic thoroughbred racing is not due to a lack of horsemanship, but rather to huge differences between its style of horse competitions and those of the rest of the world.

Unlike skill in Bökh, which carries over well to more international forms of wrestling, Mongolian horsemanship spurns the kind of courses that define dressage and similar Olympic events. Mongolians have little use for horses that excel at jumping or sprinting, though those events are practiced to some degree. Instead, Mongolians today seek the same quality in horses as their ancestors did: endurance. To Genghis Khan’s rivals in China and Europe, Mongolian horses looked weak, slow and haggard compared to their well-fed counterparts. Mongolian horses usually triumphed in the end, however, as their supreme endurance allowed armies to move quickly and fight in the most favorable locations. During battle, Mongolian horses could run back and forth constantly without tiring, allowing fresh troops to fire wave after wave of arrows at confused enemies who usually mistook this maneuvering for a full retreat.

Mongolia’s most popular distances for horse racing are 25 kilometers or more, distances that utterly dwarf those of the rest of the world. Mongolians also do not coddle their horses, which live outside in temperatures as cold as -40°C. Though often mistaken for ponies due to their diminutive size, Mongolian horses are arguably the toughest in the world. Currently, Olympic equestrian sports are set up to represent a Western, upper-class conception of horsemanship that features fancy costumes and multi-million-dollar animals jumping over short fences. Perhaps a more balanced formulation of equestrian sports that included endurance events would allow Mongolia supplement its medal haul from wrestling and judo.