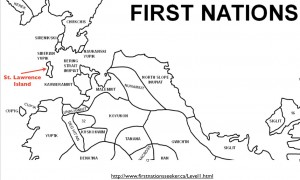 A tremendously useful website, with a wealth of cartographic resources, on the indigenous peoples of North America is Bryan A. Strome’s First Nations Seeker. Strome’s comprehensive list of indigenous groups—called “First Nations” in Canada—is organized linguistically. Strome himself has constructed a detailed map showing all the various groups, and for each particular nation he links to a variety of additional maps and other information sources.

Intriguingly—and appropriately—Strone also includes indigenous groups of northeastern Siberia. Note, on the map detail posted here, the “Sirenikski” people in the far northeastern reaches of the region, also known as the Sirenik or Sireniki Eskimo. The language of this group constituted one of the three branches of the Eskimo family, along with Inuit and Yupik. (The exonyn “Eskimo” is often considered pejorative and hence is increasingly avoided in favor of “Inuit,” but this term does not encompass the entire “Eskimo” linguistic group.) Unfortunately, the Sirenikski language went extinct in 1997. Note also that the largest area occupied by the “Siberian Yupik” people is St. Lawrence Island, which is part of Alaska, not Siberia.