Mapping the Use of Opiates Across the World 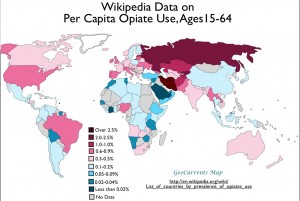 The Wikipedia contains a fairly comprehensive list of per capita opiates use by country, based primarily on the World Drug Report 2006 (WDR 2006) published by the United Nations Office on Drugs and Crime (UNODC). As the Wiki article specifies, “The indicator is the ‘annual prevalence’ rate which is shown as a percentage of the youth and adult population who have consumed the drug at least once in the past year.”

I have strong doubts about some of the data. Is it really possible that Mauritius has the third highest rate of opiates use in the world, substantially higher than that found in Afghanistan? Is it really true that Latvia has more users than Laos? Do such figures for Laos take into account opium smoking by members of the country’s numerous hill tribes?  Could the use-rate in Thailand actually be as low as that of Japan? Could use in the opiates-exporting countries of Mexico and Colombia really be lower than that found in Zambia and Angola? Color me skeptical. 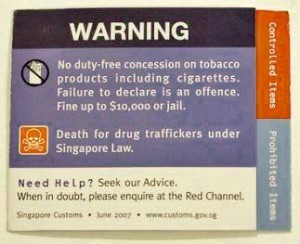 But if one takes the data at face value, some interesting patterns emerge. I have mapped the information to make such patterns more apparent. Religion appears to play no role; both the highest rate of use (Iran) and the second-lowest rate (Saudi Arabia) are found in strongly Muslim countries. A harsh legal environment does seem to correlate with low usage rates: Singapore’s figure of 0.004 percent is the lowest in the world by a substantial margin. High rates are found in countries near Afghanistan, the major source of production. Former Soviet countries also show relatively high figures, with Moldova and Azerbaijan forming major exceptions. Azerbaijan’s low figure is intriguing, especially considering the contrast with neighboring Iran.