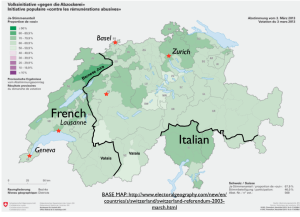 In the Swiss referendum of 2013, voters overwhelming approved a measure to limit executive compensation. Despite the fact that opponents outspent proponents 40 fold, and despite warning that the move would “undermine the country’s investor-friendly image,” 68 percent of voters approved the initiative.

As specified by the Wikipedia, the measure will:

The geographical patterns revealed by the vote on this measure are not pronounced. All parts of the country voted in favor the measure, although support varied from tepid to overwhelming, as can be seen on the map. But unlike the family law issue, spatial generalization about the voting pattern are not easy to make, whether in regard to language or the degree of urbanization. Nor is there any correlation with religion, as can be seen in the map below. At the canton level, the central cantons that formed the original core of the Swiss state were slightly less inclined to support the measure than most of the rest of the country, but that is about all that one can conclude. 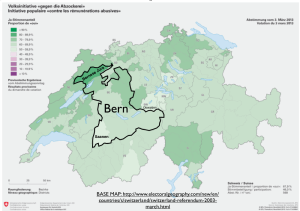 This Electoral Politics map does, however, depict differences at the district level, unlike yesterday’s map of the family-law measure, which showed only the canton level. Here we can see profound disparities across Bern, Switzerland’s second-most populous canton. The French-speaking area in the north, Bernese Jura, overwhelmingly supported the measure, whereas Obersimmental-Saanen in the southwest barely gave it a majority of its votes. Intriguingly, Obersimmental-Saanen includes Gstaad, described by the Wikipedia as “a major ski resort and a popular destination amongst high-class society and the international Jet set” that also hosts “some of the world’s most prestigious and academically intensive boarding schools, such as Institute Le Rosey and Gstaad International School.” 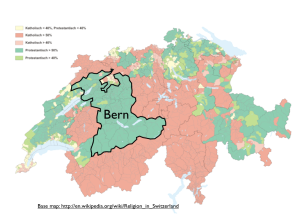 In central Switzerland, Obwalden canton also saw a close contest. This area is noted for its fiscal conservatism. As the Wikipedia states, “In 2007 Obwalden replaced the former degressive income tax (lower tax rates for higher incomes) with a flat 1.8% income tax, which is the lowest in the country.”