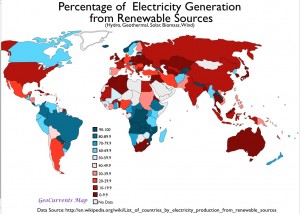 The use of renewable energy sources (hydro, solar, wind, geothermal, and biomass) for electricity generation varies profoundly from country to country, ranging from 100 percent in Albania, Iceland, Paraguay, and Tajikistan to less than 1 percent in Belarus, Eritrea, and Jordan. Intriguingly, the map bears no resemblance to that of economic development; the highest levels of “renewability” are found in some of the world’s richest countries (Norway) and some of the poorest (DR Congo). Low levels are also found across the developmental spectrum.

As can be seen in the relatively comprehensive and only slightly out-of-date data-table in Wikipedia from which the map was generated, the vast majority of renewable energy worldwide comes from hydropower. With just a few exceptions, other sources are negligible (a subsequent GeoNote will explore electricity generation through solar, wind, geothermal, and biomass in more detail).

High levels of renewable electricity generation are typically found in mountainous countries with abundant precipitation, conditions favorable for hydropower (such as Norway, Albania, Bhutan, and Laos). Gargantuan dams on huge rivers can put lowland countries in the same category; Paraguay, for example, gets almost all of its electricity from Itaipu Dam on the Paraná River. Meager electricity consumption can do the same thing. Central African Republic, for example, ranks high on the map; over 80 percent of its electricity comes from hydro, yet its total hydro figure is a paltry 0.130 GWh (2008). Finland, in contrast, a country of similar population, generates 12,588 GWh of electricity though hydro and another 8,586 through biomass, yet it manages to produce only about 30 percent of its electricity through renewable sources (2009).

As the map shows, relatively little electrical power is generated through renewable sources worldwide. Actually, the map should be redder than it is, as almost all of the countries shown as having “no data” produce small amounts of renewable energy.