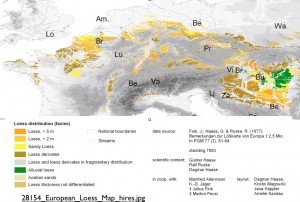 The distribution of loess has played a significant role in human history. These fertile, easily worked soils provided the agricultural foundation for several early civilizations. Chinese culture originated in the Loess Plateau and adjacent areas of the North China Plain (itself formed from eroded, river-deposited loess), and Neolithic farmers in Europe mostly cultivated loess, avoiding heavier soils for millennia. Even today, loess areas tend to be highly productive farming centers. As a result of this importance, the mapping of loess is a well-advanced project. A 2007 Centre for Enviromental Research map, a portion of which is reproduced here, is extraordinarily detailed.

“Loess” refers to any soil derived from wind-deposited, silt-sized particles. The most important areas of loess developed in the last glacial period, which ended some 12,000 years ago. The massive glaciers of the time pulverized rock into fine particles, which were deposited in the braided channels of the silt-choked rivers derived from glacial melt. During the autumn and winter, ice no longer melted, and as a result the flow of such rivers greatly diminished, leaving huge expanses of dry silt in the desiccated river-beds; windstorms would then pick up the fine material and deposit it in down-wind areas. In some places, the resulting loess deposits are tens of meters thick.