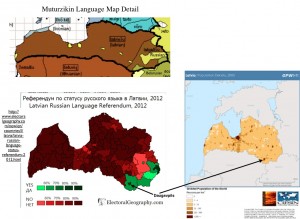 A comment from a GeoCurrents reader last week mentioned the linguistic situation in Latvia, where almost 40 percent of the population speaks Russian rather than Latvian as a first language. As it so happens, Latvia recently held a referendum on whether to elevate Russian to the status of a second official language. The election attracted a large turnout, more than 70 percent of the electorate, and the proposition was decisively defeated, gaining only about a quarter of the vote. Asya Pereltsvaig has analyzed this problematic vote in a separate post in Languages of the World. In this post, I would merely like to outline the geographical patterns apparent in the referendum.

As can be seen by comparing the three maps posted here, the “yes” vote was heavily concentrated in the urban areas of the country and in the largely Russian-speaking southeastern region. The electoral map, however, does not exactly square with the linguistic map, which was derived from the Muturzikin website. Muturzikin shows much of southeastern Latvia as Latvian-speaking, but the election returns would seem to indicate otherwise. Muturzikin also shows the city of Daugavpils, Latvia’s second largest, as being located in a Belarusian-speaking area, but standard references sources state that city’s population is predominately Russian (ethnic Latvians constitute only 18% of Daugavpils’ residents). More problematic is Muturzikin’s depiction of northwestern Latvia as Livonian-speaking. According to the Wikipedia, Livonian, a Uralic language closely related to Estonian, went extinct in 2009, when its last native speaker died. Ethnologue claims that fifteen people speak Liv, another name of the same language, but gives a 1995 date for the figure. Whatever the actual situation is, I do think that it would be fair to erase Livonian from the language map of Latvia.

I like the Muturzikin language maps because of their comprehensive coverage. I do wonder, however, about their accuracy. One intrinsic problem with linguistic mapping is the fact that languages are going extinct on a monthly basis, and it would be a difficult task indeed to update maps on such a regular schedule.