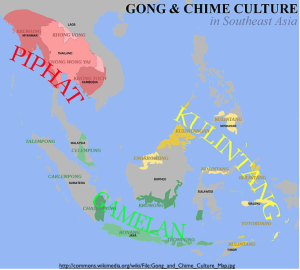 A Google image search of “culture map” returns some interesting images. A striking Wikipedia map that comes up high in the search depicts three “gong and chime” culture areas in Southeast Asia: gamelan, kulintang, and piphat. The gamelan percussion orchestras of Java and Bali are relatively well known globally, but the same cannot be said for piphat or kulintang, both of which deserve wider recognition. As mentioned in the Wikipedia article on the topic, tuned “pot gongs” are an extremely important part of the musical traditions of Southeast Asia.

Kulintang, found in the southern Philippines and eastern Indonesia, is the least well-known Southeast Asian gong tradition. As described by the Wikipedia:

Like the other two, kulintang music is primarily orchestral with several rhythmic parts orderly stacked one upon another. It is also based upon the pentatonic scale. However, kulintang music differs in many aspects from gamelan music, primarily in the way the latter constructs melodies within a framework of skeletal tones and prescribed time interval of entry for each instruments. The framework of kulintang music is more flexible and time intervals are nonexistent, allowing for such things as improvisations to be more prevalent.

Gong music is found over a much wider area of Southeast Asia than is visible on the map. Many local gong-dependent musical styles, however, lack the complexity of gamelan, kulintang, and piphat. In the 1980s, I lived in a tribal village in northern Luzon for over a year, and simple gong beating was an essential part of indigenous religious festivities. The gongs used here were made of bronze, and had been imported from China long ago.  The great Yale anthropologist Harold Conklin made a detailed study of the gongs used by tribal groups in northern Luzon, as discussed in this article.