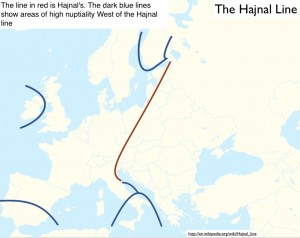 A little-noted cartographic genre is based on heavy lines, named for the individuals who brought them to notice, that separate broad areas distinguished by specific features. Examples include Wallace’s Line, which separates Eurasian from Australian wildlife regions in eastern Indonesia, and the Barassi Line, which divides Australia into rugby and Australian-rules-football spheres. In Europe, one of the more prominent of such divisions is the so-called Hajnal Line, extending from St. Petersburg to Trieste, which supposedly splits Europe into two historical demographic regions. West of the line, marriages were traditionally late (averaging around twenty-four for women and twenty-six for men), the age-gap between husbands and wives was relatively small, and a significant proportion of the population never married. East of the line, the opposite conditions supposedly obtained. Many demographers have argued that the marriage patterns found to the west of the line did not exist elsewhere in the world, and that they were significant both in constraining fertility and nurturing subsequent European economic development. 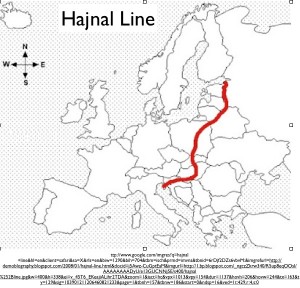 More recently, many demographers and other scholars have questioned both the validity and significance of the Hajnal Line. But regardless of the specific empirical evidence for or against the line’s existence, I am highly suspicious of its geographical position. It is extraordinarily unlikely that any such line would take a straight course between two cities, as it was originally conceived. The Wikipedia map of the subject, moreover, does not even correctly place the line, as its southern terminus is offset well to the west of Trieste. The second map’s revised line, shown as meandering across Europe, is seemingly more realistic. Still one must wonder whether eastern Hungary and eastern Slovakia have ever differed substantially from western Hungary and western Slovakia in regard to marriage patterns. In the end, variation in such matters is usually a matter of subtle gradients rather than hard divisions.