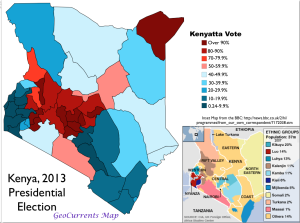 Media reports of the recent Kenyan presidential election have generally focused on the facts that the contest was not as violent as many feared it would be, and that the winner, Uhuru Kenyatta, has been charged by the International Criminal Court with committing crimes against humanity in relation to the bloody presidential election of 2007. Some articles have also mentioned the intensely ethnic nature of the voting pattern, the topic of today’s GeoNote.

Although the election was relatively close, with Kenyatta receiving just over 50 percent of the vote, in most counties the results were extremely lopsided. As can be seen on the map that I constructed, in most cases Kenyatta either took over 80 percent of the vote or less than 30 percent, with his tally ranging from more than 97 percent (Nyandarua) to less than a quarter of one percent (Homa Bay). Such patterns reflect ethnic divisions. In the most basic terms, Kenyatta won handily in Kikuyu and Kalenjin areas, whereas his opponent, Raila Odinga, won by similar margins in Luo and Kamba areas. Not surprisingly, Kenyatta is himself Kikuyu, whereas his running mate, William Ruto, is Kalenjin, while Odinga is Luo, and his running mate, Stephen Kalonzo Musyoka, is Kamba.  Such a divisional pattern is typical in Kenyan elections. The voting behavior of the fifth of Kenya’s “big five” ethnic groups, the Luhya, is less predictable.  As the Wikipedia explains:

In Kenyan politics, the Luhya population commonly referred to as the Luhya vote in an election year, is usually a deciding factor of the outcome of an election. The community is known to unite and vote as a block usually for a specific political candidate without division of mind and regardless of political differences. Given their high population numbers, a political candidate who enjoys Luhya support is almost always poised to win the country’s general elections, barring incidents of fraud. The community is thereafter “rewarded” politically, by one of their own being appointed vice president or to a high profile political office by the winning candidate. 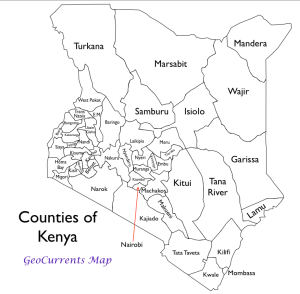 In the 2013 election, however, such patterns did not hold, as the Luhya voted fairly strongly for Odinga, the losing candidate. As it was known ahead of time that Odinga was popular in Luhya-land, some bloggers thereby incorrectly predicted that he would win the election. Evidently Kenyatta did better than expected among some of the country’s smaller ethnic groups.

These election returns indicate that Kenya has a fairly poorly consolidated sense of common nationality. Here, ethnicity matters far more than anything else, outweighing national issues and ideological divisions. Although regionally and ethnically skewed elections are common in many countries, seldom are they as extreme as in Kenya.