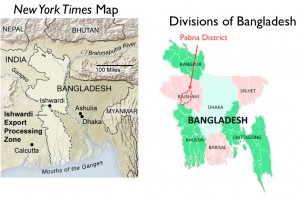 Today’s New York Times features a major article on labor strife in the Bangladeshi apparel industry. The article itself is interesting and, in general, well reported and well written. The accompanying map, however, is laughable. The map purports to show the location of the Ishwardi Export Processing Zone, which it depicts as sprawling over roughly the western third of Bangladesh. A zone of this size would cover roughly 5 million hectares. In actuality, the Ishwardi Export Processing Zone encompasses all of 125 hectares (309 acres). Official documents describe its location as: “Pakshl, Pabna. 3.7 kms from Pakshi Bridge through by pass road, 10.60 kms from Ishwardi Airport.” Through the use of shading, the New York Times depicts the zone as covering not only all of Pabna District, but virtually the entire extent of three Bangladeshi divisions. The line that the map uses to indicate to the zone, moreover, is highly inaccurate as well, pointing to an area well to the south of the actual Ishwardi Export Processing Zone.

If the New York Times wants to maintain its claims to being the country’s newspaper of record, it might want to consider hiring a competent geography editor.