For those who like country-based lists and rankings, the Wikipedia is hard to beat. It even has a “lists of lists,” linking to such articles as a “list of countries by birth rate,” “list of the most charitable countries,” and “list of countries by cement production.” Another Wikipedia meta-list, “top international rankings by country,” gives information on some of the categories in which particular countries rank at the highest—or lowest—position. Or, as the article itself puts it, the list provides “global-scale lists of countries with rankings, sorted by country that is placed top or bottom in the respective ranking.”

The Wikipedia’s “top international rankings” article seeks to “distinguish notable statistical indicators from trivial ones.” Whether it does so is for the reader to decide, but I am not convinced of the significance of China’s top position in spinach production or of its “best performance at women’s badminton Uber Cup.” China, one quickly learns from the list, occupies the top-most position in many categories, which is exactly what one might expect, given its population. Other countries make limited appearances, but dozens are classified at the top—or bottom—of some indicator. Chad: lowest ease of doing business. Fiji: best performance at Rugby World Cup Sevens (men). Peru: top producer of silver, quinoa, and maca.

Maca?—the quirky list does have some surprises. At any rate, Peru produces 4,589 tons of it a year. Epidium meyenii, or maca, is, the Wikipedia tells us, is “an herbaceous plant … grown for its fleshy hypocotyl, which is used as a root vegetable and a medicinal herb.” It is unusual indeed to find a starchy “root” that is consumed both for calories and medicinal effects, but that does seem to be the case. Maca use is problematic, as it “contains glucosinolates, which can cause goiters when high consumption is combined with a diet low in iodine.” The author of the Wikipedia article, however, is impressed by its potential:

A recent review states “Randomized clinical trials have shown that maca has favorable effects on energy and mood, may decrease anxiety and improve sexual desire. Maca has also been shown to improve sperm production, sperm motility, and semen volume.

The “list of top international rankings by country” is not always accurate, sometimes failing even to square with the sources that it links to. Syria gets top-billing for fennel production (might that be regarded as trivial?), yet when one clicks on the link, one finds Syria in sixth place, with a total fennel yield one-quarter that of India. 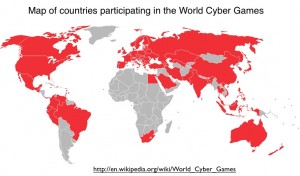 South Korea gets first-place rankings in several significant categories: best student performance in reading, largest ship builder, most intensive broadband coverage. It also makes the top slot in some quirky categories: “battle of the year,” an annual international b-boying series, and “World Cyber Games,” which, the Wikipedia tells us, “is an international competitive video-gaming [e-sports] event operated by South Korean company World Cyber Games Inc.” Such a standing is not surprising: South Korea takes electronic games very seriously. StarCraft Brood War, after all, is a professional spectator sport in the country.