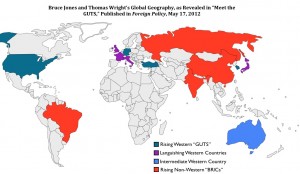 Warnings about the impending “decline of the West,” which date back at least to 1918*, have grown increasingly common in recent years—as have works debunking such predictions. The most recent entry in the latter category is an article in the current edition of Foreign Policy by Bruce Jones and Thomas Wright entitled “Meet the GUTS,” the wordy subtitle of which reads, “The West Isn’t Declining. Here Are Four World Powers Enjoying an Astonishing Renaissance.” Although Jones and Wright make some cogent points about differential economic growth and political clout, their spatial framing of the issue is pure fantasy, based on the redefinition of basic concepts of world geography to fit their strained arguments.

The newly coined term “GUTS” refers to the four countries that are supposedly leading the Western “renaissance”: Germany, the United States, Turkey and South Korea. Whether these states are actually experiencing a sustained resurgence that will refashion international relations is highly debatable: Germany is beset with the Euro-zone crisis, the U.S. remains economically troubled and hamstrung by political gridlock, mounting inflation threatens to undermine Turkey’s recent boom, and South Korea, with one of the world’s lowest birthrates, faces an impending demographic implosion. But regardless of their economic standings, how can Turkey and especially South Korea be so casually classified as “Western” countries? South Korea, after all, lies at the eastern extremity of the Eurasian continent, the landmass that gave rise to the supposed global division separating “the West” from “the East.”

The longitudinal divide that yielded “the West” and “the East” has a long and complex history, as analyzed at some length in The Myth of Continents. In simplified terms, the idea traces back to the division of the Roman Empire under Constantine, and was reinforced by the much later split with Christianity between Eastern Orthodoxy and the Western tradition (Roman Catholicism and later Protestantism as well). In the modern era, the geographical focus of the West grew less stable, but it generally remained focused on Western Europe and its North American offshoot. The idea of the “East,” in contrast, separated into two separate concepts, that of a cultural East (or “Orient”), largely coincident with “Asian Civilizations,” and that of the geopolitical East, which tended to focus on Russia. During the Cold War, geopolitical framing usually prevailed, pitting a Soviet-dominated East against a West defined around the NATO alliance. During this period, industrialized East Asian allies of the U.S., especially Japan, were occasionally associated with the West, but their far-eastern locations, along with their non-Western cultural and historical backgrounds, usually kept them out of the so-called Western World. The “Western Civilization” courses that once formed a mainstay of U.S. college education, for example, had no room for Japanese or Korean history.

With the end of the Cold War such geographical framing ceased to be appropriate, and as a result the concept of the geopolitical East, much like the closely related idea of the “Second World,” essentially disappeared. Yet Cold-War thinking still undergirds Jones and Wright’s definition of “the West.” South Korea is a Western country, they tell us, because it is “one of America’s oldest and most reliable allies.” By the same token, Turkey’s NATO membership, along with its basically democratic governance, is viewed as placing it firmly within the Western camp.

But if Jones and Wright define the West on strategic, geopolitical grounds, how do they frame its rival, the region of the world that it is supposedly competing with? Here they focus on the “rise of the BRICs,” which has been associated with the “supposed decline of the Western powers.” But the so-called BRIC countries—Brazil, Russia, India, and China—are tied together by nothing beyond the facts that they are large and have experienced significant economic growth over the past decade. India and China are actually regional rivals, and democratically governed India has been building close economic and military ties with “the West” in recent years. Brazil, moreover, is much more easily construed as a “Western” country than is South Korea if one moves beyond narrow strategic considerations.

Regardless of what “the West” is pitted against, it is highly questionable whether the region, as defined by Jones and Wright, has any real coherence. I suspect that few Koreans would place their country within the Western World, and that many more would take offence at any such notion. In Turkey the issue can be assessed more directly. When the country was under authoritarian rule, it certainly inclined toward Western Europe and the United States, but under democratic rule the Turkish electorate has essentially rejected the notion that Turkey is a fundamentally Western country. Public opinion polling, moreover, shows that most Turks view the United States and Western Europe in unfavorable terms, in part because of the deep cultural and social divisions that separate their country from “the West.”

Lest one accuse Jones and Wright of being too optimistic about “Western” prospects, that admit that “the West is also hobbled by four countries that have yet to recover from the financial crisis: Britain, France, Italy, and Japan.” Including Japan in the West is of course as problematic as including South Korea. And placing Britain in the same economic category as Italy and Japan betrays a distressingly short-term sense of economic trajectories. But perhaps we can be relieved that the authors did not frame the lagging foursome as the “BIFJs,” as they think that acronyms have real significance, concluding their article with the observation that, “Perhaps these rising powers need an acronym if they are to be taken seriously. Is it time for the BRICS to meet the GUTS of the West?”

Between the rising GUTS and the languishing “BIFJs,” Jones and Wright locate a single intermediate Western country, Australia. They admit that Australia has done very well economically in recent years, caution that it “has not had the impact of a rising power,” yet go on to state that its “geographical position, close security relationship with the United States, and vast energy supplies means it is likely to become more influential in global politics”—seemingly implying that the GUTS may soon become the GUTAS. But what of Canada, a significantly more populous and economically powerful country than Australia? As is so often the case in U.S. publications, Canada simply goes unmentioned.

*1918 was the year in which the first volume of Oswald Spengler’s Der Untergang des Abendlandes (or Decline of the West) was published.