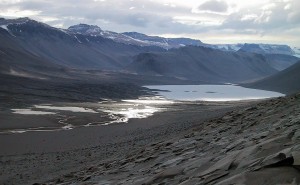 The world has many famous salt lakes. Central Asia’s Caspian and Aral Seas, alongside the Dead Sea between Jordan and Israel, are perhaps the best known. Utah’s Great Salt Lake and California’s Mono Lake and Salton Sea are also by no means obscure. These bodies of water are all fascinating in their own right, but by the standards of the world’s “hypersaline lakes”, they are amateurs. In fact, the world’s most extreme salt lakes are to be found not in a hot Afro-Eurasian desert, but in some of the coldest places of the Earth.

With about 98 percent of its surface buried by around a mile of ice and almost no precipitation of any kind away from its coast, Antarctica is just about the last place one would expect to find bodies of liquid water. Nevertheless, tiny Don Juan Pond (see image at left from Ross Sea Info) in the Antarctic region of Victoria Land manages to remain free of ice year-round through by means of its staggering salinity. Widely considered the saltiest lake in the world, Don Juan Pond boasts salinity twelve times that of ocean water, allowing it to stay liquid at temperatures well below -50°C. Don Juan Pond may be the most extreme Antarctic salt lake, but it is not alone. Much larger Lake Vanda maintains roughly ten times the salinity of seawater. Lake Vanda is the final destination of Antarctica’s largest river, the Onyx, which flows only for brief periods during the summer, and looks more like a small creek than a continent’s mightiest river. Unlike Don Juan Pond, Lake Vanda’s surface remains covered in ice year-round, though during the summer liquid water tends to collect around the edges of the lake.

Compared to the miles of ice that define most Antarctic terrain, Antarctica’s salt-lakes support a veritable cornucopia of life. The algal blooms that occasionally grow in Lake Vanda may not seem like much, but by the standards of inland Antarctica they are quite significant. Salt lakes outside of Antarctica are much more hospitable to life, but their high salinity tends to result in a lack of biological activity relative to freshwater counterparts.

The saltiest lake outside of Antarctica is Djibouti’s Lake Assal. Lake Assal is about as salty as Lake Vanda, and its relatively large size makes it the world’s largest reserve of commercially exploitable sea salt. Positioned at the bottom of a volcanic crater, Lake Assal finds itself in an awkward position as both a key pillar of Djibouti’s economy and one of the country’s most prized environmental assets. Only bacteria can survive inside the lake, but there are a few shrubs that manage to grow nearby. Most of the lake’s inflow comes from the Red Sea through subterranean waterways, which makes sense given that the shores of Lake Assal are the lowest land in Africa at 155 meters below sea level.

Though Turkmenistan’s Garabogazköl Aylagy is not technically a lake—it is a lagoon connected to the Caspain Sea by a narrow inlet—it maintains a salt concentration even higher than that of Lake Assal. The hypersalinity of the lagoon is quite remarkable considering that the Caspian Sea itself is only about half as salty as ocean water. Virtually no water enters the lagoon from other sources, which, when combined high rates of evaporation, results in a staggering fast inflow of water from the Caspian (see this picture from Wikipedia). The lagoon was cut off from the Caspian and completely dried out in the 1980s in an effort to maintain the volume of the then-shrinking lake, but the effort backfired when salts from the dried seabed wafted over the surrounding landscape causing health and environmental damage similar to what was experienced around the Aral Sea. The lagoon was restored to its former extent in 1992, when concerns about the Caspian Sea began to fade.