Google Maps’ Street View has long been a wonderful tool for exploring urban environments from afar. Now Google, in a partnership with Mexico’s National Institute of Anthropology and History, has taken Street View to the ruins of thirty ancient Mesoamerican cities, and hopefully up to sixty more within the next year. Viewers can explore a number of Classical Mayan sites, from the massive Temple of Kukulkan in Chichen Itza, to the stunning seaside ruins of Tulum. The project also features sites further north in the Valley of Mexico, including the city of Teotihuacan. Google gathered the footage using a 360-degree camera mounted on a specialized tricycle. 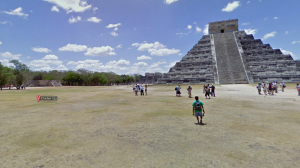 Chichen Itza. (all photos are screenshots of Google Street View)

This is not the first time Google has taken Street View beyond the confines of public road networks. Street View cameras have gone over mountain passes, floated down the Amazon River, explored the inner reaches of art museums, toured the narrow streets of medieval European cities, and much more. Clearly Street View is no substitute for actually visiting ruins, but it can still give users an interesting introduction to ancient Mesoamerican cities and the many differences between them.

For example, viewers can easily see that Teotihuacan (top picture) was built with a specific urban form in mind. The city is arranged orthogonally around a great central street known as the Calzada de los Muertos, with two major pyramids as well as many smaller buildings fitting into the pattern. Mayan cities, by contrast, clearly lack this kind of spatial orientation. Rather than streets, Mayan cities like Palenque tend to focus in on a central open space surrounded somewhat haphazardly by impressive temples. Unlike Teotihuacan, there is little evidence of stone buildings used for non-ceremonial purposes.

No doubt this new tool should please Michael E. Smith, an Arizona State Archaeologist and expert on Mesoamerican cities. Smith analyzes the evolution of Mesoamerican city planning on his blog, Wide Urban World, and draws a clear distinction between the layout of Teotihuacan and what he calls the “basic Mesoamerican urban plan.” The basic plan focuses on central plazas with a dense concentration of tall ceremonial structures and unplanned satellite residential areas. Teotihuacan “made several major innovations in urban layout”, including not only the grand central avenue but also the planned residential areas that are not readily visible in Street View.

Not all the Latin American cities making recent debuts on Google Street View are ancient. Several Brazilian cities including Fortaleza, Brasilia, Natal, Recife, and Salvador, headline the other additions. As the city that helped to define a generation of planned capitals, Brasilia almost cries out for a comparison to its Mesoamerican counterparts. Plazas and wide roads feature prominently in Brasilia, though instead of being a central focus, they actually seem to constitute most of the city. A viewer clicking through Brasilia could be forgiven for feeling that despite suffering between one and two millennia less decay than its Mesoamerican counterparts and being far larger, the city lacks the kind of immersive views that make the ancient cities so enchanting. In short, though Google Street View is a 21st Century technology, it sometimes works best when operating in decidedly less modern environments.