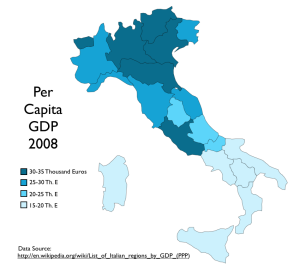 In considering the recent Italian election, it might instructive to compare the regional returns with levels of economic development. In order to do so, I constructed a map of Italian per capita Gross Domestic Product by region. The information is dated: the most recent I could easily find is from 2008, courtesy of the Wikipedia. But as the Italian economy has been relatively stagnant over the past five years, an up-to-date GDP map would probably look much the same.

As mentioned in the yesterday’s GeoCurrents post, most of northern Italy has habitually voted for the right, central (or perhaps central-northern) Italy has opted for the left (especially Tuscany and Emilia-Romagna), whereas the rest of the country is more mixed, although several southern regions usually favor the right. Economically, as is well known and as can be seen in the map, northern Italy is much wealthier than southern Italy.  (Lazio, in the center, forms an exception to this pattern.) Yet there is no real correlation between level of economic development and voting behavior. The richest region (by this measurement), South Tyrol/Alto Adige, tends to vote for regionalist parties, the second richest region, Lombardy, usually opts for the right, and the third richest region, Emilia-Romagna, is a stalwart of the left. In the south, Basilicata tends to lean more to the left than neighboring regions, but it does not stand out on the electoral map.

Regional factors, rather than narrowly economic ones, seem to guide Italian electoral geography.