NASA’s Earth Observatory is well known for its “image of the day” series, which showcases particularly striking satellite images. Today’s depiction shows a dust storm over the Persian Gulf (which NASA does indeed call the “Persian Gulf,” without qualification). Many other arresting images are found on the same site. One posted on June 3, for example, shows the smoke plumes from New Mexico’s massive Whitewater-Baldy Complex fire. 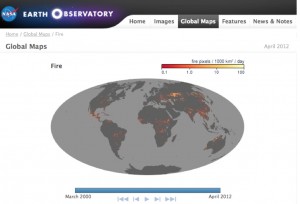 The Earth Observatory site also includes a number of month-by-month animated global maps, dating back to March 2000, depicting such environmental issues as snow cover, net primary productivity, land surface temperature anomalies, and so on.  The series on fire is particularly instructive, showing “the locations of actively burning fires around the world on a monthly basis, based on observations from the Moderate Resolution Imaging Spectroradiometer (MODIS) on NASA’s Terra satellite.” The color scheme portrays the number of fires rather than the size of the areas burned, and as such can be somewhat misleading. Places with active fire suppression in which fuel build-up can result in spectacular conflagrations—such as New Mexico—will thus appear relatively fire-free, whereas places in which local cultivators and herders set numerous small fires will be over-represented on the map. 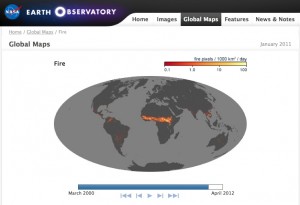 That said, the map does reveal a number of interesting patterns. The majority of fires appear in the tropical wet-and-dry zones, located roughly between five and eighteen degrees latitude north and south of the equator.  Southern Russia and adjacent areas, however, also have a lot of fires, especially in April and May. In the tropics, Africa stands out for its fire frequency. From December through February, fires are especially common in the Sahel and Sudan zones south of the Sahara; from June through August, the main fire belt switches to south-central Africa. In both cases, not surprisingly, the dry season is the fire season. Parts of Africa, however, experience little burning. The paucity of fire is especially evident in the Ethiopian Plateau, an area long noted for its plow-based 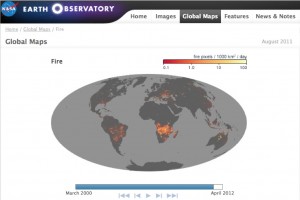 farming systems rather than the “slash-and-burn” horticulture that characterizes much of the rest of the continent.