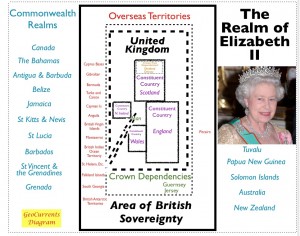 While contemplating Seth Jackson’s post on the lands of the British Crown, it occurred to me that a map-like diagram would be helpful for visualizing the geopolitical complexity that he described. I have posted here an attempt to do so. Feedback is welcome.

I have put a heavy black line around the “area of British sovereignty” to stress that this is the essential geopolitical unit as far as international relations are concerned, as areas of common sovereignty are widely viewed as the basic building blocks of the global geopolitical order. I am not happy, however, with the label “area of British sovereignty,” which seems much too weak. I have put a heavy dashed line around the United Kingdom in deference to the fact this unit looms largest in the public imagination.

Seth and I have wondered whether the other members of the Commonwealth of Nations should be included as a vague outer unit, as Elizabeth II is the official head of the organization. But the diagram seems busy enough as it is.