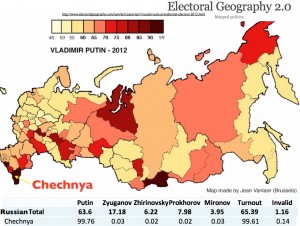 The Russian government has been pouring money into Chechnya in recent years —US$21 billion by some accounts. Many of these investments have been questionable. A recent report indicates that, “the swanky, 32-story-high Hotel Grozny City, with its three restaurants and five-star service, is pretty much always 90 percent empty.”

On the electoral map, note that Moscow was the only part of Russia to give less than half of its votes to Putin.