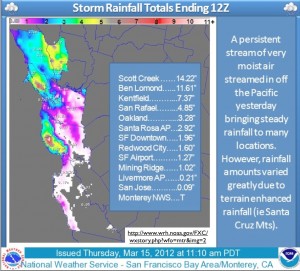 A recent GeoNote praised the U.S. National Weather Service for its accurate rainfall prediction maps, noting as well the specific forecast that had just been made for northern California’s impending storm. As that storm has passed, it now seems reasonable to ask how well the Weather Service did. The answer: not very, but in a very interesting way. The foreseen rainfall did appear, but it remained focused in a rather narrow band, drenching the Santa Cruz Mountains and Marin County. The particularities of the weather system greatly enhanced the effects of orographic lift, concentrating of rainfall the windward side of the mountains. As a result, the precipitation forecasts were much too low for wet areas and much too high for dry areas. 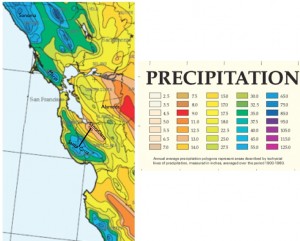 The Bay Area is characterized by extreme geographical variability in rainfall. While much of northern Sonoma County receives more than 70 inches of rain a year on average (1,778 mm), parts of eastern Alameda County get less than 10 inches (254 mm). The gradient is particularly steep between the Santa Cruz Mountains and the Santa Clara Valley, ranging from over 50 (1,270) inches a year to less than 12 (305 mm) in the span of about 20 miles (32 km; indicated by the black line on the rainfall map). The most recent storm was marked the greatest differential I can recall. In a little more than two days, some weather stations in the Santa Cruz Mountains received more than 14 inches (356 mm), whereas much of the Santa Clara Valley received barely a trace. Currently, the San Lorenzo River in Santa Cruz is at flood stage while San Jose is still gripped by an extreme drought, having received only about 25 percent of average precipitation during the current water year (which runs from the beginning of July to the end of June).

The differences in precipitation between the Santa Cruz Mountains and the Santa Clara Valley stems from the rain-shadow effect: air rises as it passes over the mountains, as it rises its pressure decreases, cooling the airmass and hence increasing its relative humidity to the point of condensation, resulting in rainfall. On the lee-side of the mountains, the air descends, increasing pressure, warming the airmass, decreasing relatively humidity and hence reducing or even eliminating precipitation. In most storms, other mechanisms also induce rainfall, such as frontal passages, steep lapse-rates (warm surface, cool upper air), vorticity, and so on. The Bay Area’s recent storm generally lacked such atmospheric dynamics. It did, however, have a steady stream of warm, moist air moving from the southwest to northeast that remained trained on the zone between Santa Cruz and Marin counties, drenching their mountainous areas.