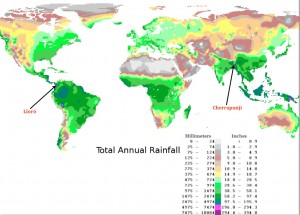 A recent GeoNote stressed the impossibility of accurately measuring the coastlines of countries, owing to the intricacies of fractal geometry. But even without fractal complications, many basic geographical measurements are difficult if not impossible to specify. “What is the rainiest place on earth?” seems like a simple question, but it is not. 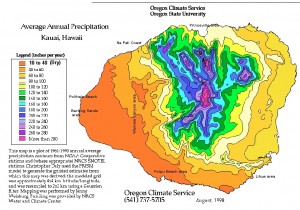 One problem with determining the world’s wettest place is the highly specific nature of precipitation patterns in many rainy areas. Extremely rainy paces can be relatively small areas where local topography wrings excess moisture out the monsoonal flow or the trade winds, and it is not possible to establish enough weather stations to fully capture such micro-climatic differentiation. Consider, for example, Mount Waiʻaleʻale on the island of Kauaʻi in the Hawaiian Islands, which—according to some sources—receives more than 452 inches (11,500 mm) of rain a year, and is thus one of the contenders for the “rainiest place” title. But as can be seen on the map, the part of Kauaʻi that receives more than 280 inches a year is extremely limited. Had the weather station on Mount Waiʻaleʻale been placed in a slightly different locale, it may well have recorded a different level of precipitation. 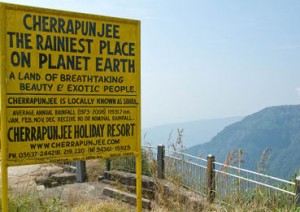 Precipitation also varies year by year, which can result in different places exchanging the title, as rainfall is often recorded in 30-year running averages. For the same reason, one often finds disparate figures for the same locale. In the case of Mount Waiʻaleʻale, the Wikipedia article gives a figure of 452 inches (11,500 mm) in one place and 373.83 inches (9,495.3 mm) in another. Year-to-year precipitation fluctuation is a major issue for Cherrapunji and near-by Mawsynram in India, two other contenders for the title. Cherrapunji’s annual average rainfall is often recorded as 463.66 inches (11,777 mm), and that of Mawsynram at 467.4 inches (11,872 mm). Recently, however, the region in which they are located had several notably “dry” years, leading to some speculation that global warming was reducing local rainfall. 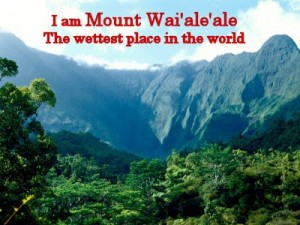 But even if it could be determined that Cherrapunji still gets more average annual rainfall than Mount Waiʻaleʻale, that does not necessarily mean that it can necessarily be counted as a “rainier place,” as assessments of “raininess” can have a subjective component. Mount Waiʻaleʻale gets heavy rain all year long and indeed almost every day, whereas Cherrapunji and vicinity get almost all of their rain during the summer monsoon; in January, Cherrapunji gets less than half of an inch on average, and thus dries out considerably.

The contest between Cherrapunji and Mount Waiʻaleʻale may be moot, however, as it now seems that parts of northwestern Colombia get more rain than either place—and receive heavy downpours throughout the year. According to the Wikipedia, the Colombian town of Lloró receives, on average, 523.6 inches (13,300 mm) a year. Northwestern Columbia, moreover, is a remote area with a sparse network of weather stations; it thus seems possible that even higher precipitation figures could be obtained on some of the rugged slopes of the Andes Mountains in the area. 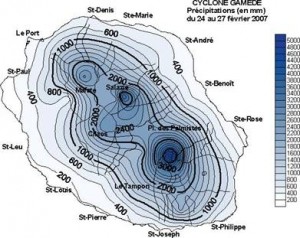