When lecturing on world economic geography, I always stress the incomplete nature of the standard data, emphasizing the size of the unrecorded, underground economy, or “black market,” that constitutes up to twenty percent* of global production. Obtaining decent information on such matters is difficult, and as a result I am always on the lookout for maps, tables, and graphs that portray aspects of illicit exchange. I recommend Havocscope to my students, a website devoted to “global blackmarket information” that pegs the total value of its subject at $1.79 trillion. If you are curious about the price of a contract killing of a police chief in Mexico, Havocscope has an oddly precise answer: $20,832. The reliability of the data is open to question, but to the extent that it is accurate, I am staggered by the price discrepancies. A seller of a human kidney (for transplant) in Kenya supposedly receives $650, whereas one in Ukraine can get $200,000. One would expect substantial differences between these two countries, but not by this margin. Perhaps the sample size is a little too small.

According to the Havocscope website, the top five illicit markets worldwide are counterfeit prescription drugs ($200 billion), prostitution ($187 billion), counterfeit electronics ($169 billion), marijuana ($142 billion), and illegal gambling ($140 billion). I find the global marijuana industry of particular interest due to its extensive long-distance trade. Whereas prostitution and illegal gambling are relatively ubiquitous, cannabis production and consumption zones tend to be more localized. Unfortunately, Havocscope provides little geographical information. It does, however, give price differences by country, reporting that a gram of marijuana costs $110 dollars in the United Arab Emirates and eight cents in India. Such figures do not account for quality, and it is suspicious that the same table gives the price in the United States at “$20-$1,800 per ounce” (one ounce = 28.3 grams). A crowd-sourced website with more precise figures based on more robust sample sizes, “The Price of Weed,” claims that high-quality cannabis in California sells for $250 an ounce, whereas low-quality product goes for $194. Oddly the same table puts medium-quality cannabis at $193.62 an ounce. In Minnesota, the site tells us, high-quality marijuana fetches $373.92 an ounce, whereas low quality “weed” can be purchased for $184.39. Such figures would suggest marked regional difference in the definition of “quality”; they also demonstrate a lack of market clearing, as would be expected in regard to a mostly illegal product. (Under California state law, “medical marijuana” is legal and the threshold for medical use is low; Washington and Colorado are transitioning to fully legal cannabis markets.) 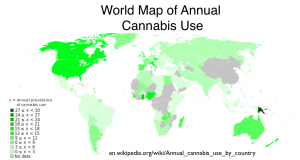 In regard to worldwide cannabis consumption, the Wikipedia provides a somewhat useful map and table, based on the World Drug Report 2011 published by the United Nations Office on Drugs and Crime (UNODC). As can be seen, Papua New Guinea ranks at the top, with 29.5 percent of its population (ages 15-64) using the drug annually. In the table, which unfortunately does not match the map, the United States also ranks extremely high, at 21.4 percent. Other leaders include Ghana (21.5%), the Czech Republic (15.2%), and Italy (14.6%). Countries at the bottom of the chart include Japan (0.1%), Libya (0.05%), and Singapore (0.004%). I am suspicious of these figures, however, as they would have us believe that people in the United States are twice as likely as those of Canada and almost five times more likely than those of the Netherlands to use cannabis on an annual basis. 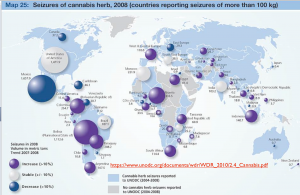 Vastly more reliable figures are available in regard to seizures by law-enforcement officials. As can be seen on the UNODC maps posted here, “cannabis herb” seizures are concentrated in the Western Hemisphere, with Mexico, the US, Bolivia, Colombia, and Paraguay figuring prominently. In the Eastern Hemisphere, Nigeria, Morocco, Indonesia, and South Africa occupy the top positions. In regard to hashish, or highly processed cannabis resin, seizures are concentrated in Europe, the main consumption zone, and in Afghanistan, Pakistan, Iran and Morocco, the main production areas. 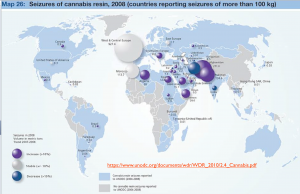 Neither consumption levels nor quantities seized provide information on how much cannabis is produced, as production can be geared toward export and as seizures are linked to police priorities. Comprehensive production figures are difficult to locate. In 2008, Paraguay and Mexico were widely cited as the top producers, whereas a 2010 UN report put Afghanistan in the top position. But again, quality issues as well as the difference between herb and resin can skew the reporting. But it does seem clear that Paraguay, Morocco, and Afghanistan are major producers but relatively modest consumers (with official prevalence rates of 1.6, 4.2, and 4.3 percent respectively). As a result, all three countries export massive amounts of cannabis.

Maps of the global cannabis trade are also lacking. The US Drug Enforcement Administration Museum and Visitor’s Center in Arlington, Virginia, however, does present one such map. It is, unfortunately, of dismal quality, as is the website that accompanies it. The problems begin with the webpage title, “Cannabis, Coca & Poppy: Nature’s Addictive Plants.” This statement is misleading at several levels. “Poppy,” to begin with, is not “an addictive plant,” although the resin from the opium poppy certainly is. More important is the fact that cannabis is less addictive 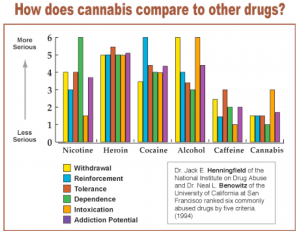 than coffee and tea (caffeine) and vastly less so than tobacco (nicotine), plants ignored by the website. The map, moreover, appears to be little more than a vague attempt to link exporting and importing countries with lines of various thickness. It makes it appear as if the cannabis flow from Cambodia and the Philippines to Japan is much larger than that from Paraguay to Brazil and Argentina, which is patently untrue. A literal reading of the map would lead one to imagine a major flow of marijuana from Colombia to the virtually uninhabited boreal forests of northern Canada, and a somewhat smaller flow from the frigid shores of Hudson Bay to New England. The mapmaker is also apparently unaware that Newfoundland, Nova Scotia, Baffin Island, and Vancouver Island are parts of Canada. 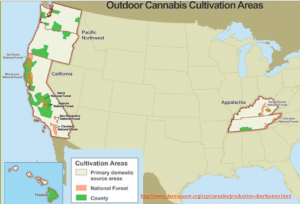 The same website includes a map of “Outdoor Cannabis Cultivation” in the United States. If anything, it is a greater cartographic catastrophe. The counties marked as cultivation zones seem to have been selected almost at random. The cartographer places the Sierra National Forest in the middle of the agricultural San Joaquin Valley and the San Bernardino National Forest in the Mojave Desert. Overall, the website is an embarrassing compendium of undue simplification, misleading information, and outright fabrications.

In one regard, however, the DEA’s portrayal of the domestic cannabis industry in the United States is largely on target: environmental degradation—the subject of the next GeoCurrents post.

* As estimated by Misha Glenny in his invaluable book, McMafia: A Journey Through the Global Criminal Underworld