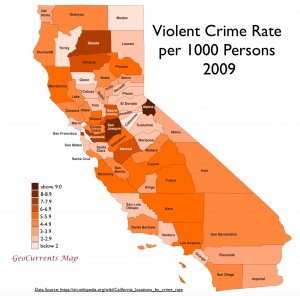 Mapping crime rates by county in California shows few easily explicable patterns. At first glance, the map of violent crime (which is unfortunately somewhat dated) appears almost random. That of property crime shows a concentration in the Central Valley (which I have outlined on the map), but only a slight one: note how low the rate is in Kings County. The 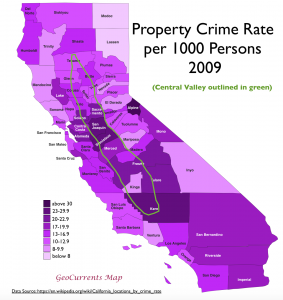 remainder of this post will focus on the map of violent crime, seeking correlations with patterns found on maps of other phenomena. 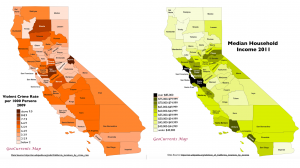 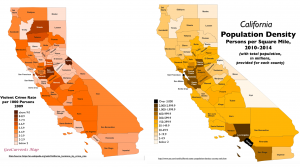 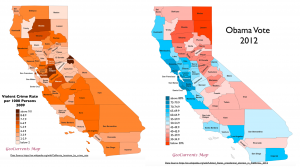 Do voting patterns have any connection to violent crime rates? As the next set of paired maps indicate, the answer is again “no.” 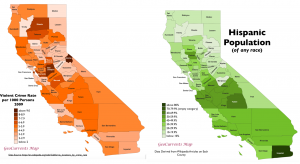 What if one turn to the hot-button issue of crime and race & ethnicity, a topic so controversial that I hesitate to even mention it? But in this case as well, no clear correlations exist, at least at the county level of analysis. Consider, for example, the paired maps of violent crime and the Hispanic population. Although the southern half of the Central Valley (the San Joaquin Valley) has a generally high violent-crime rate and a large 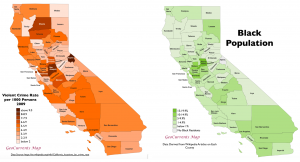 percentage of Hispanic residents, some of the most Hispanic counties in the state have very low rates of violent crime (Imperial and Colusa). Nor is there any clear correlation between the state’s relatively small Black population and the violent crime rate. Note that Alpine, by far the most violent county in the state according to these statistics, has no Black residents whatsoever. 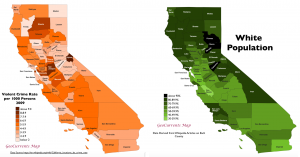 Similar things can be said in regard to California’s White and Asian populations. To be sure, many overwhelmingly white counties have very low rates of violence, such as Calaveras and Trinity, but Tehama and especially Shasta counties are also heavily White yet have strikingly high 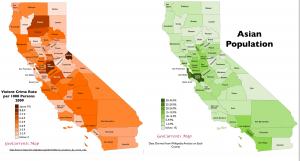 rates of violent crime. Heavily Asian counties tend to have low crime rates, but that is not the case in regard to San Francisco.

Several of the counties that stand out most clearly on the map of violent crime deserve more consideration. Alpine County, with its particularly high level of crime, is the largest mystery, although its minuscule population means that such figures might not be very indicative. San Joaquin County, on the other hand, is no surprise, as its main city, Stockton, has long been regarded as a relatively dangerous place with a grim and decaying downtown. It is probably not coincidental that Stockton suffered severely in the economic crisis of 2008, earning it the unenviable title of “Foreclosureville USA.” (To be fair, however, Stockton does have many nice neighborhoods as well as a habitually underrated university, the University of the Pacific.)

The high rate of violent crime in Shasta County, on the other hand, did come as a surprise to me. But the elevated—and rising—level of crime in the county’s main city, Redding, has been noted by several publications. In 2012, Forbes magazine rated the small city (metro population 182,000) as the fifth most dangerous place for women in the United States, with a particularly high rate of rape. An exaggerated local blogsite calls itself “Crumbling Town – Redding, CA: The Horrific Demise of a Once Beautiful and Peaceful Town in Northern California.” Its most recent post is grimly amusing:

We have so many jailhouse tatted adult men riding children’s bicycles, we have no choice but to embrace them as our official mascots. They can be found zipping in and out of traffic, casing parking lots, trolling alleyways, pedaling through quiet neighborhoods by day, returning to rape, pillage, and plunder by night. They look so cute, how can anyone not love them?

The mascot’s costume is consistent with his lifestyle: He can go skin or shirt, shorts or long, shaved head or hat. He accessorizes with stolen headphones, sunglasses, and knives. His body is illustrated with tattoos. He always has a bulging backpack and frequently carries enormous bags of “recyclables”

Redding’s Ubiquitous Mascots own this town. Untouchable by police, living lives of anarchy with no consequences or responsibilities.

Time Magazine noted the high rate of crime in Redding in 2014, but unlike the other sources that I consulted it offered an explanation:

There were 1,298 violent crimes in the Redding metro area in 2012, up from 851 violent crimes in 2007. On a standardized, per 100,000 resident basis, violent crime rose more than 53% in that time. Additionally, property crimes rose by more than 50%, the most of any metro area reviewed, despite a nationwide 12.7% decline in such crimes during that time. According to the Redding Record Searchlight, some area residents believe that the area’s high crime rates may be related to marijuana cultivation. Officials in Shasta County — which makes up the Redding metro area — recently elected to ban outdoor growing, although the city of Redding is not included in the ban.

I am quite skeptical, however, of this explanation. The heart of marijuana cultivation in California, the so-called Emerald Triangle of Humboldt, Trinity, and Mendocino counties, has a low to moderate crime rate. Cannabis is also widely grown in the foothills of the Sierra Nevada mountain range, in a belt extending from Nevada to Mariposa counties, a region that happens to have the lowest rate of the violent crime in the state.

But it may not be marijuana cultivation per se that is associated with crime, but rather with who is doing the cultivating. I recently had an instructive conversation with the sheriff of a north-coastal California county on precisely this issue. According to him, the hippies living in the hills who have been cultivating small patches for decades are no problem at all, but the young men moving in, those with “perpetually sore shoulders” seeking to get rich, are a major problem. Perhaps Shasta County has many of latter sort of cannabis cultivator. But I suspect that its real problem is associated instead with biker gangs and methamphetamine production.